A Benefit for All Granite State Nonprofits 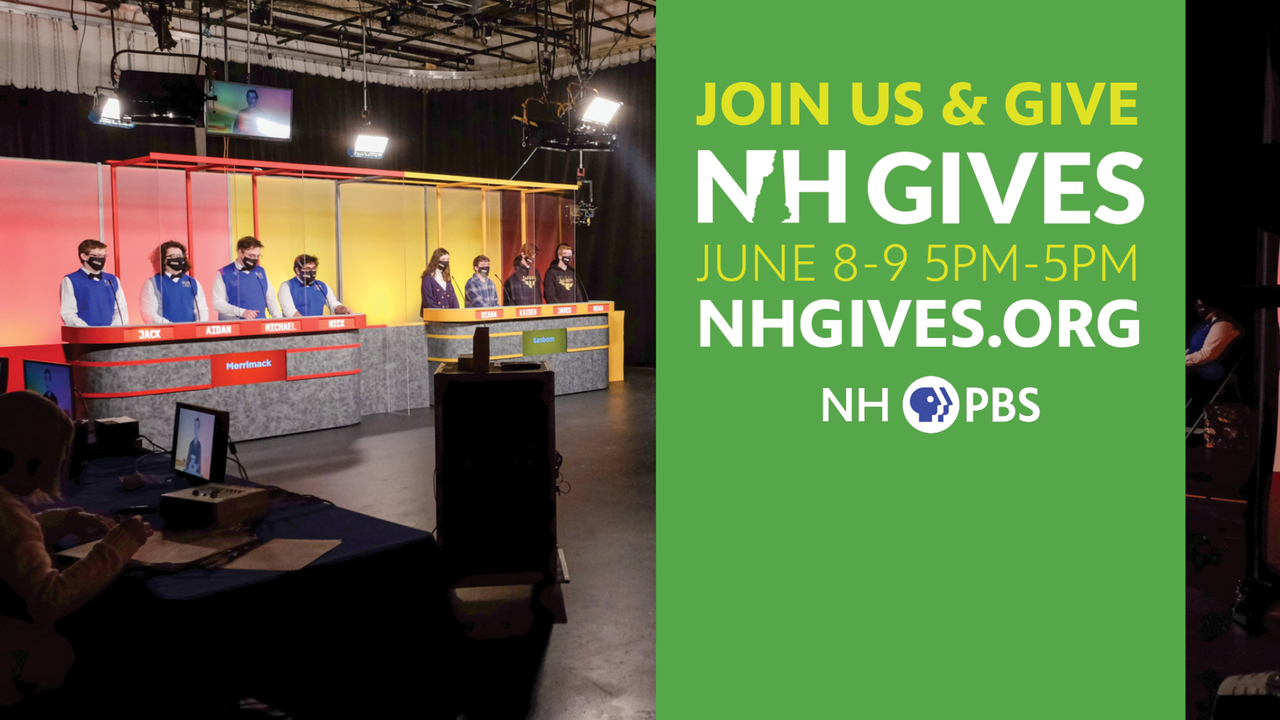 “New Hampshire PBS is proud that NH Gives will be streaming LIVE from the NHPBS studios. We’re honored to highlight the critical role nonprofits play in the Granite State. We encourage everyone to support these vitally important organizations,” says Peter Frid, NHPBS President and CEO.

NHGives.org is an easy-to-use, secure platform where people can learn about nonprofits doing amazing things in the Granite State and donate directly. People can choose from nearly 600 nonprofits to support — and take advantage of more than $1 million in matching gifts to increase the impact of their contributions.

NHPBS is also participating in NH Gives with a NHPBS Board of Directors match of $5,000 and will be LIVE streaming starting on June 8th from 4:45–9pm and then on June 9 from 3-5pm. Generous supporter Rath, Young and Pignatelli has also donated $1000 for a donor match during NH Gives.

When the COVID-19 pandemic hit, NHPBS immediately launched two new statewide informational initiatives with a new online digital series THE STATE WE’RE IN and with Governor Sununu’s weekly press conferences, that are streamed on nhpbs.org and also on Facebook. NHPBS also engaged in educational virtual screenings and thought-provoking discussions about THE BLACK CHURCH, the new documentary HEMINGWAY from Ken Burns and a local program that tackles the shortage of workforce housing, COMMUNITIES AND CONSEQUENCES II.

NHPBS built on its educational foundation by launching the LEARN AT HOME website, providing thousands of families across the region with digital resources for students, educators and parents. NHPBS continued to inspire children from grades K-5 to write and illustrate their own stories with the 27th annual Kids Write Contest and even retrofitted the GRANITE STATE CHALLENGE set to allow students to compete in the 39th season in person at the studios in Durham.

“Like so many other organizations during the pandemic, New Hampshire PBS changed course to focus on the immediate needs of our communities,” says Dawn DeAngelis, Vice President and Chief Content Officer. “By focusing on educational initiatives and statewide in-depth reporting, NHPBS continues to serve those who need the critical information the most.”

Since the New Hampshire Center for Nonprofits launched NH Gives in 2016, the event has raised more than $4.8 million from thousands of donors to support hundreds of nonprofits across New Hampshire.

There will be multiple opportunities for people to double their donations. Almost $320,000 in matching funds, made possible by the New Hampshire Charitable Foundation and its donors, will be offered at intervals during the 24-hour event to help encourage people to give.

A 24-hour live stream on NHGives.org and Facebook will feature participating nonprofits, New Hampshire notables and entertainment. Greg Kretschmar, the host of Greg & the Morning Buzz on 100.3 WHEB and Rock 101-FM, and Scott Spradling, an Emmy Award-winning former television reporter, anchor and political director, will host the live stream from 4:45 to 9:30 pm on June 8 and from 3 to 5:30 pm on June 9 from the NHPBS studios in Durham, NH.