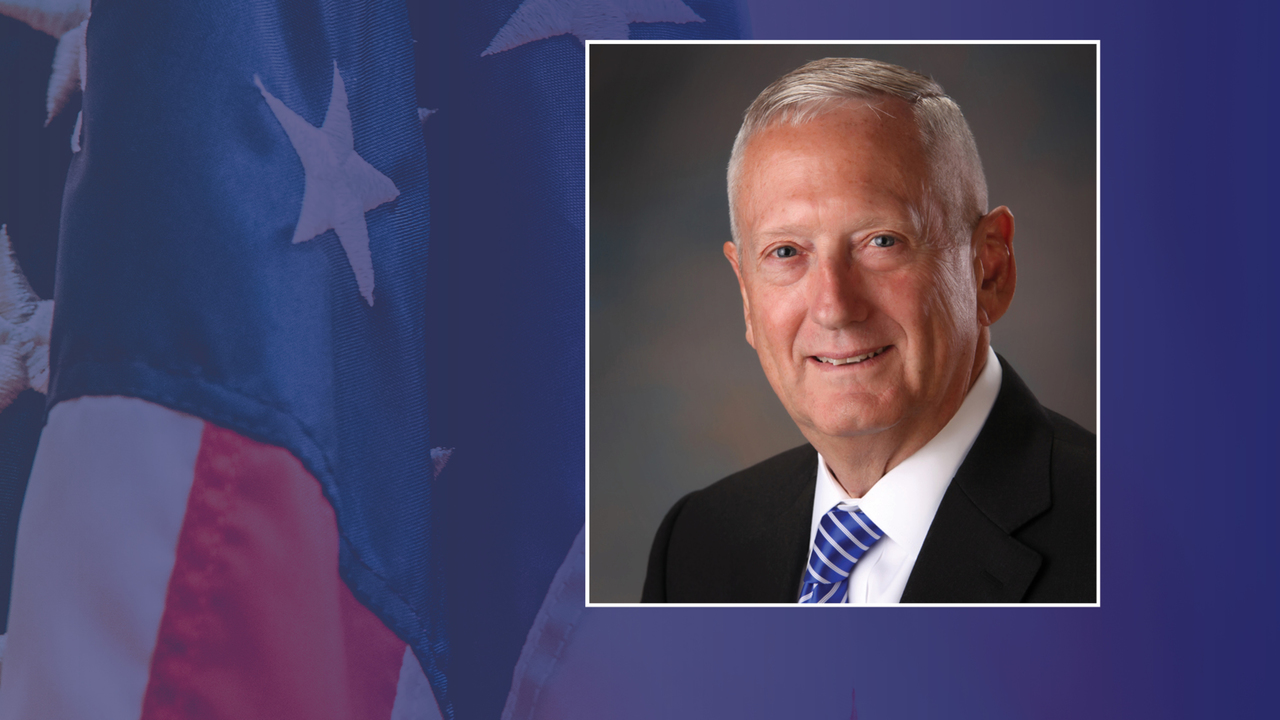 A Conversation with General James Mattis: What is the Role of the Military in a Democracy?

This free event will be held online. Please visit nhcivics.org/events to register and to receive a viewing link.

“I am pleased that so many young people will participate in this conversation. They are the next generation and I am eager to hear what’s on their minds,” noted General Mattis. “I am looking forward to sharing my experience with them.”

“This conversation will speak to both youth and adults. Understanding the role the military plays in our constitutional system of government is crucial today” added Dr. Janet Breslin-Smith, retired War College professor. “It’s important to understand what it means when an officer takes the Oath to preserve, protect, support and defend the Constitution against all enemies, foreign or domestic. This Oath unites our military with members of the executive branch and congress who all pledge allegiance to the Constitution.”

General James Mattis served over 40 years in the Marine Corps as an infantry officer, plus duty in the Office of the Secretary of Defense, as NATO Supreme Allied Commander, and as Commander of U.S. Central Command comprised of 250,000 U.S. and allied troops in combat across the Middle East and South Asia. Retiring in 2013, he was a Davies Family Scholar at Stanford University's Hoover Institution. Subsequently he served as the 26th Secretary of Defense from January 2017 through December 2018.

Dr. Janet Breslin-Smith draws on her 40-year career in public service at the local, national, and international arenas. Over her career she had leadership roles in the United States Senate, the National War College, and in Saudi Arabia. She has written and lectured on the Constitution, legislative strategy, strategy and culture, democracy and governance, and military family issues. A Professor of National Security Strategy for 14 years at the National War College in Washington, DC, Dr. Breslin-Smith was the first woman to Chair the Department of National Security Strategy.

“This event, and the William W. Treat Lecture Series, is made possible with support from New Hampshire Humanities, in partnership with the National Endowment for the Humanities,” said Martha Madsen, executive director of the New Hampshire Institute for Civics Education (NH Civics). “The Treat Lecture Series honors Judge Treat’s legacy of bridging political and other divides to improve discussions central to democratic society.”

Please visit nhcivics.org/events to register for this free event.

About the New Hampshire Institute for Civics Education (NH Civics)

About the Warren B. Rudman Center

The Warren B. Rudman Center for Justice, Leadership & Public Service at the UNH Franklin Pierce School of Law serves as a hub for public discourse on the policies and current events that shape our society. It provides programmatic and financial support for students interested in exploring careers in public service while supporting public programming and academic inquiry that align with its mission. The Center honors former U.S. Senator Warren B. Rudman, also the state’s attorney general, who was widely admired for his integrity and willingness to work with politicians across the aisle to advance the public interest.

Return to the
About New Hampshire PBS
Main Page

NHPBS is a 501(c)3 multi-media, educational non-profit organization governed by a local Board of Directors. As the only statewide, locally owned and operated PBS member station, five transmitters carry the station’s signal to 98% of the Granite State, (and beyond). Over 200,000 students annually benefit from NHPBS' free, curriculum-aligned, educational services, while hundreds of thousands of online visitors access information and interactive content. NHPBS engages audiences via community screenings and events that spark meaningful dialogue and community connection throughout the Granite State. The station receives no state funding and is supported by nearly 22,000 members.

For over sixty years, NHPBS has provided the residents of New Hampshire and Northern New England with the best of PBS and award-winning local programs. To this day, the station remains committed to a handful of time-tested tenets: commercial free programming that engages minds, connects communities, and celebrates the Granite State in a way that entertains as well as educates and has impact beyond the broadcast. NHPBS is valued by its viewers for providing high quality, educational programming that can’t be found anywhere else. PBS and its member stations, like NHPBS, has been voted the #1 trusted brand in America for 14 consecutive years by the American public (Source: Roper Poll).

We love connecting with our viewers! Let us know what you love to watch. E-mail us with your ideas and comments. Stay connected with New Hampshire PBS!

Your ideas, comments and questions are important to us.

Facebook makes it easy for you to connect and share with your family, friends and us online.

Twitter is an online social networking service that enables its users to send and read text-based messages.

Instagram is a fun and quirky way to share your life with friends through a series of pictures.

Flickr is an image hosting and sharing service and community.