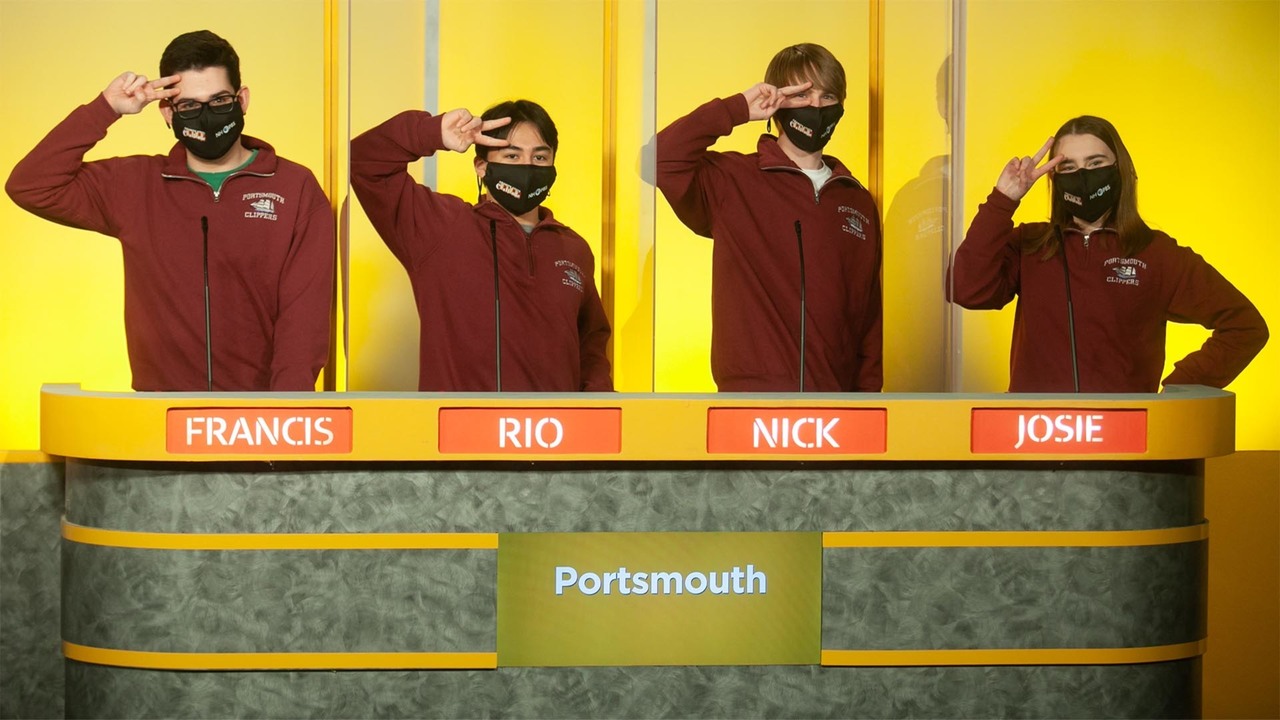 Playing for Londonderry was captain and senior Austin Kilgore along with sophomores Nathan Ferrick, Brendon Saranich, and Xander Cogan. The team was coached by Peter Willis. Londonderry High enrolls 1,521 students.

In the first round of the game, correct answers are worth 10 points and there is no loss of points for incorrect answers. Londonderry's Austin Kilgore picked up the first points in the match by correctly answering a question about Olympic bronze medals.  Francis Powell of Portsmouth picked up the next 10 points by naming the Charleston as a dance named for a South Carolina city. Rio Marcus of Portsmouth added 10 points to his team's score by knowing that Myanmar was once known as Siam. Josie Sedam added another 10 points to Portsmouth's score with a question about kimchi. With just under a minute left in the round, Portsmouth had a commanding lead of 240-70. The Unitil Power Question, worth double points was one of the final questions in the round. Neither team was able to pick up 20 points with a question about Canadian singer-songwriter Leonard Cohen. The final question of the round was about Paul McCartney and was correctly answered by  Austin Kilgore of Londonderry. The round ended with Portsmouth in the lead by a score of 250-80

In the second round of the game, correct answers are worth 20 points and there is no loss of points for incorrect answers. The second round also usually includes the 40 for 40 Question from a past season of Granite State Challenge, which celebrates the 40th season of the game.  Londonderry's Austin Kilgore, who picked up the first points in the first round, also picked up the first points in the second round by naming Joseph Heller as the author of Catch-22. Nick Dahlen of Portsmouth picked up the next 20 points in the round with a question about smallpox. Francis Powell correctly named the Bronx as the New York borough that is home to a stadium with plaques honoring Mickey Mantle and Joe DiMaggio with the 40 for 40 Question from season 25, adding 40 points to Portsmouth's score. Xander Cogan of Londonderry picked up 20 points with a question about the Gulf Stream.  The round ended with Portsmouth in the lead by a score of 510-160.

The third round of the game is the Three Strikes and You're Out Round. Each team picks a 10-question category and each team member, starting with the captain, gets one question. The team continues to answer questions until they miss three questions. Each team also has three passes in each round.  If a team answers all 10 questions correctly, they pick up an additional 10 points. Londonderry chose the category Top Hats. All of the answers in the category were related to hats. Austin Kilgore answered the first question about the Cat in the Hat.  Nathan Ferrick passed on a question about the sorting hat at Hogwarts, but Brendon Saranich was able to answer it correctly, Nathan Ferrick was later able to identify the Mad Hatter from Alice's Adventures in Wonderland. The team picked up 50 points in the round.

Portsmouth picked the category Barking Up the Wrong Tree. All of the answers in the category included the word tree or were related to trees. Portsmouth picked up 50 points in the round, missing on questions about tree kangaroos, the novel A Tree Grows in Brooklyn, and giant sequoias. The round ended with Portsmouth in the lead by a score of 560-210.

In the final round, correct answers are worth 20 points, but an incorrect answer will cost a team 20 points and leads can be quickly lost or gained.  Unfortunately, Londonderry was not able to catch up in the round and Portsmouth High won the game by a score of 760-330.