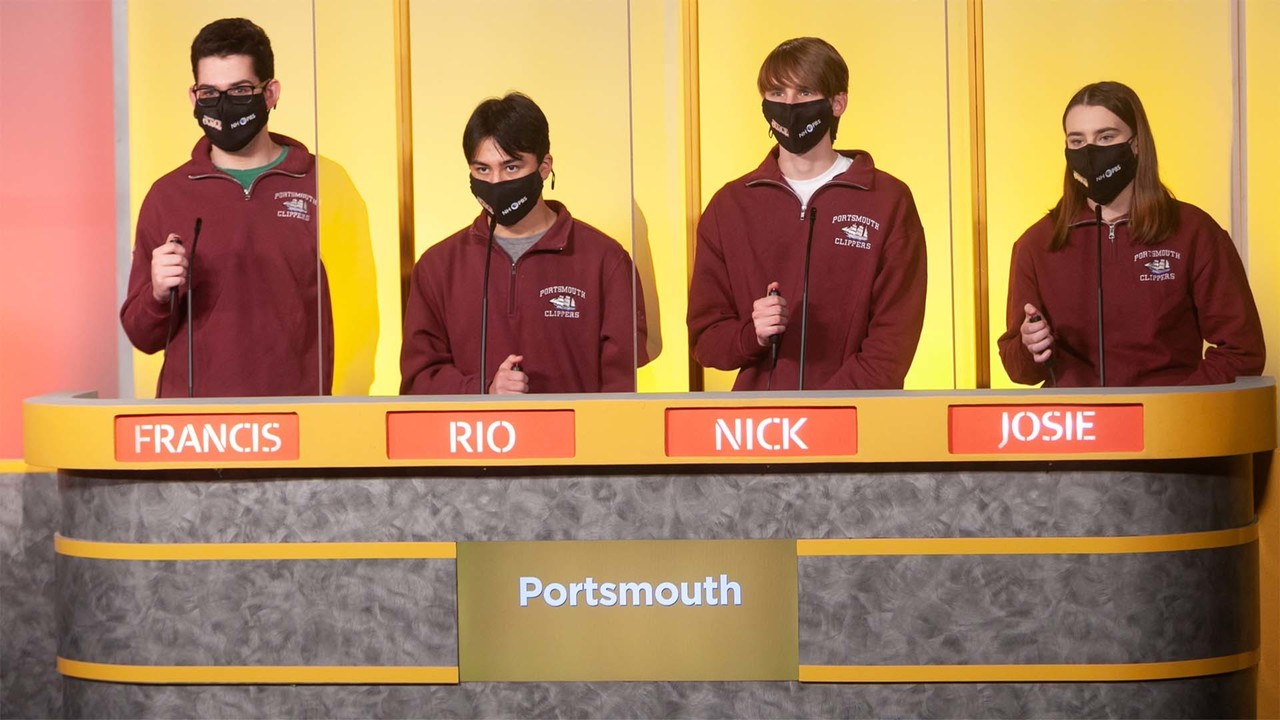 (DURHAM, April 18, 2022) - ConVal Regional High met Portsmouth Hgh in the third game of the quarterfinal round.

Playing for ConVal were captain and senior Meara McClusky and seniors Leah Krason, Kendall Larson, and Sam Rousseau. They were joined by alternates seniors Elijah White and Gwyneth Inglis. The team was coached by Chris Heider and Eric Bowman. ConVal Regional High enrolls 737 students and is located in Peterborough. It serves the towns of Antrim, Bennington, Dublin, Francestown, Greenfield, Hancock, Peterborough, Sharon, and Temple.

In the first round of the game, correct answers are worth 10 points, and there is no loss of points for incorrect answers. Kendall Larson of ConVal put the first 10 points on the board by knowing that the Boston Marathon is 26.2 miles. Josie Sedam of Portsmouth picked up 10 points for knowing that the song "Anything You Can Do I Can Do Better" was from the musical Annie Get Your Gun. Rio Marcus picked up 10 more points for Portsmouth when he named Toy Story as the first feature-length animated movie.  Francis Powell of Portsmouth knew that there is no  Roman numeral for zero and that Andrew Johnson succeeded Abraham Lincoln as president after his assassination taking Portsmouth to an early lead of 40-10. ConVal captain Meara McClusky picked up points for knowing that Babe Ruth was known as the Bambino and the Sultan of Swing. With just under a minute left in the round, Portsmouth held a slim 10-point lead and the score was 130-120. ConVal's Kendall Larson tied the score by knowing that Macropods are found in Australia. Neither team could identify David Souter as a retired U.S. Supreme court justice who served as the attorney general of New Hampshire or a question about painter Norman Rockwell and the round ended in a 130-130 tie.

In the second round of the game, correct answers are worth 20 points and there is no loss of points for incorrect answers. The second round also includes the 40 for 40 Question from a past season of Granite State Challenge, which celebrates the 40th season of the game, and the Unitil Power Question worth double points. Leah Krason of ConVal opened the round by quickly calculating that 10 gallons of Gatorade dumped on a coach would be the equivalent of 160 cups. The Unitil Power Question was next and ConVal went out to a 190-130 lead when Kendall Larson named Bolt as a 2008 Disney film featuring a dog voiced by John Travolta. Francis Powell of Portsmouth correctly answered a question about Tahiti and Josie Sedam answered a question about Geneva picking up 40 points for their team and tying the score at 190-190. Francis Powell answered the next two questions correctly and Portsmouth was out to a 230-190 lead. The next question was the 40 for 40 Question from season 31 - This theater was a key venue in the Harlem Renaissance and is famous for its amateur nights and helped launch the careers of Jimi Hendrix, James Brown, the Jackson Five, Stevie Wonder, and Mariah Carey. - Francis Powell came though for Portsmouth again by correctly naming the venue as the Apollo Theatre and extending Portsmouth's lead to 270-190.  At the end of the round, Portsmouth lea by a score of 350-270.

The third round of the game is the Three Strikes and You're Out Round. Each team picks a 10-question category and each team member, starting with the captain, gets one question. The team continues to answer questions until they miss three questions. Each team also has three passes in each round.  If a team answers all 10 questions correctly, they pick up an additional 10 points. ConVal picked the category On Fire in which all of the answers were related to the word fire. They picked up 50 points by getting five questions correct. Portsmouth picked the category The Kids Are All Right. All of the answers in the category were related to goats or the word goat. They picked up 90 points, missing only a question about a song about a goatherd from the Sound of Music. At the end of the round Portsmouth led by a score of 440-320.

In the final round, correct answers are worth 20 points, but an incorrect answer will cost a team 20 points and leads can be quickly lost or gained. Rio Marcus of Portsmouth kicked off the round with a question about the book series, Captain Underpants. Kendall Larson of ConVal picked up 20 points with a question about  Hans Solo, the captain of the Millenium Falcon. Francis Powell scored 20 points for Portsmouth with a question about author A.A. Milne, and Meara McClusky of ConVal added 40 points to her team's total with questions about emeralds and Peter Rabbit bringing the score to Portsmouth 480 and ConVal 380. Josie Sedam of Portsmouth answered a question about former German chancellor Angela Merkel, Sam Rousseau of Conval knew that birds of a feather flock together, and Nick Dahlen of Portsmouth knew the koala bears are marsupials and not members of the bear family bringing the score to 520-400. Despite a strong round, ConVal couldn't catch up to Portsmouth and at the end of the round, Portsmouth won the game with a final score of 520-420.

The winner of the match will face either Manchester Central or Londonderry High in the semifinal round.