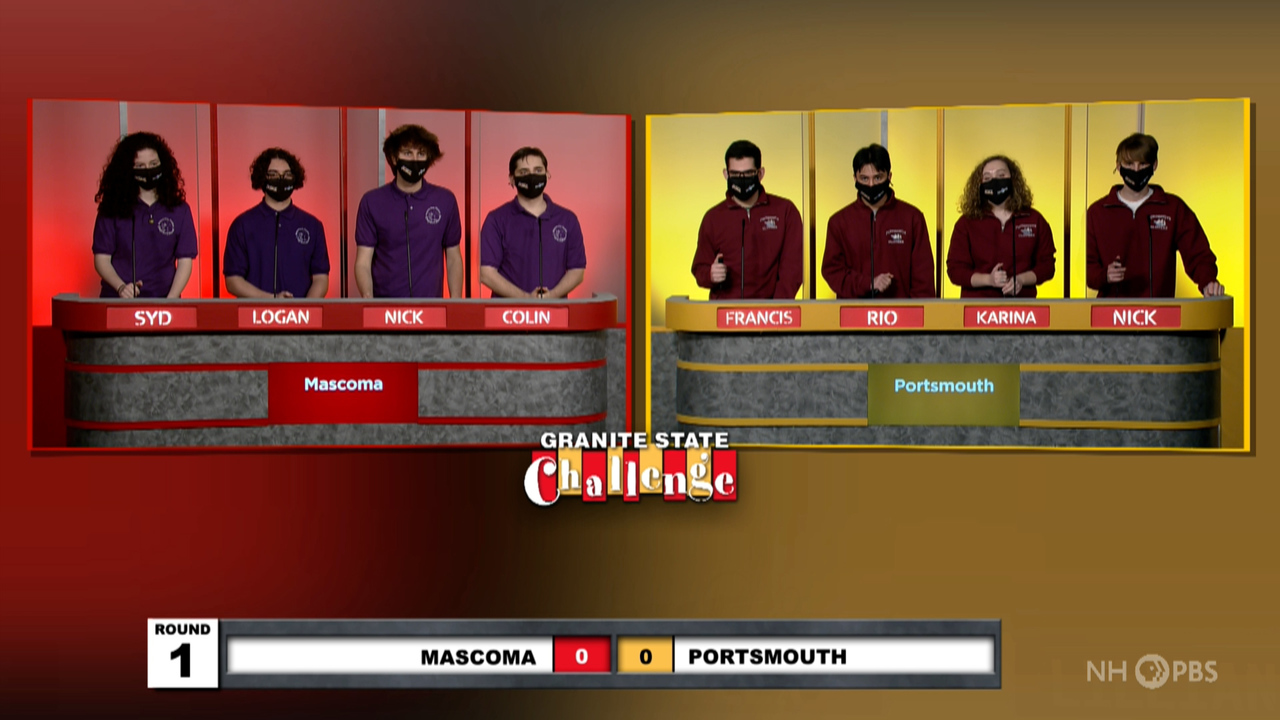 Granite State Challenge is played in four rounds. In the first round, correct answers are worth 10 points and there is no penalty for an incorrect answer. Colin of Mascoma Valley scored the first 10 points of the game by correctly naming Atlantis as the fictional city Plato wrote about that fell into the sea. Francis from Portsmouth came right back and named Punch and Judy as a bickering husband and wife pair of puppets with origins in the 16th century and picked up another 10 points on a question about the poet Henry Wadsworth Longfellow.  Nick of Mascoma Valley picked up 10 points by naming Texas as the state that was part of Mexico until 1836, and Syd of Mascoma correctly named the piano as an instrument that comes in grande, upright and electric versions.  Both teams played a strong first round, but at the end of the round, Portsmouth led by a score of 150-120.

In the second round, correct answers are worth 20 points, and like in the first round, there is no penalty for an incorrect answer.  The round usually contains two questions with 40 points - the Unitil Power Question and the 40 for 40 question which honors the 40th season of Granite State Challenge and is taken from a past season of Granite State Challenge.  Francis of Portsmouth answered the first question in the round, by correctly spelling Luge, the winning word in the Scripps Spelling Bee in 1984, the year Granite State Challenge premiered.  Neither team could identify the song, "Blue Suede Shoes" as the song where Elvis warned people not to step on his colorful footwear. Francis of Portsmouth picked up 40 points for his team in the Unitil Power Question by knowing that Tim Duncan, Karl Malone, and Kevin Garnet were all power forwards. Francis of Portsmouth also picked up 40 points for his teams by correctly finishing this quote by Winston Churchill - "I have nothing to offer but blood, toil, tears and ..."  with the word sweat. The extra points on the Unitil Power Question and the 40-40 question helped Portsmouth widen their lead and they ended the round with a  score of 410-160.

The third round of the game is the Three Strikes and You're Out Round. Each team picks a 10-question category and each team member, starting with the captain, gets one question. The team continues to answer questions until they miss three questions. Each team also has three passes in each round.  If a team answers all 10 questions correctly, they pick up an additional 10 points.

Mascoma choose the category "Say Cheese" in which all of the answers were related to the word cheese or included the word cheese. Mascoma answered four correctly, picking up 40 points.  Portsmouth chose the category "Block Party" in which all answers included the word block.  They answered two questions correctly and picked up 20 points. The round ended with Portsmouth still in the lead by a score of 430-200.

In the final round, correct answers are worth 20 points, but an incorrect answer will cost a team 20 points and leads can be quickly lost or gained. Colin of Mascoma put 20 points on the board by answering a question about Helen Keller.  Francis picked up the next 20 points for Portsmouth by knowing that parts of what would become New Mexico and Arizona were purchased from Mexico in the Gadsen Purchase. Portsmouth lost 20 points on a question about the boiling point of water in both celsius and Fahrenheit. nick of Mascoma correctly answered the question. In the end, Mascoma was not able to catch up and Portsmouth won the game by a score of 590-260.

Portsmouth now goes on to meet either ConVal High or Hopkinton High in the third game of the quarterfinals airing on Saturday, April 9, 2022, at 6 pm on NHPBS.