Windows to the Wild airs Wednesday, January 20 at 7:30pm on NHPBS 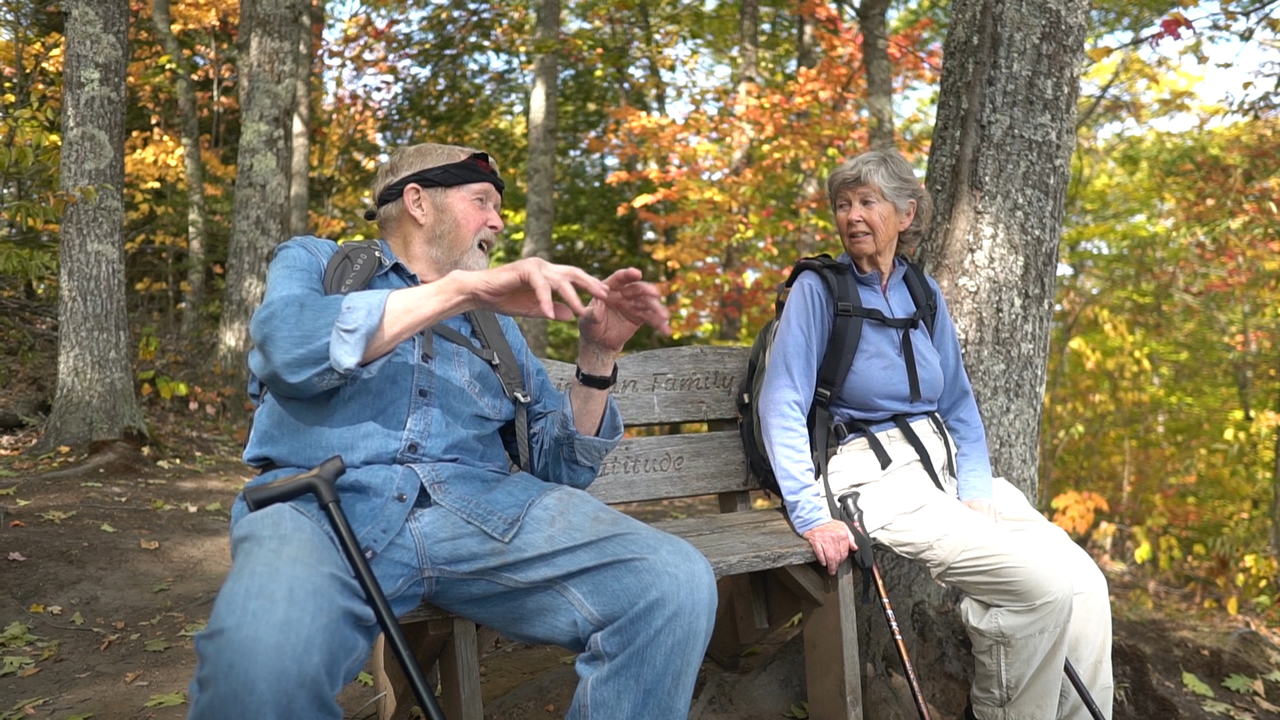 (Durham, NH, January 15, 2020) - Laura and Guy Waterman used to live the big city life. She worked for New York City’s biggest publisher. He wrote speeches for Washington’s most important political players. Then, in the 1970s, Laura and Guy gave it all up for a more simple life in the outdoors.

On a bright, sunny fall day, WINDOWS TO THE WILD host Willem Lange caught up with Laura Waterman on hiking trek up Wright’s Mountain in Bradford, Vermont.

With Willem’s terrier, Kiki, hiking with them, Laura and Willem talked about her early life with Guy and their move from New York City to rural Vermont in the 1970s. She and her late husband Guy are known throughout the country as conservationists, prolific writers and guardians of New England’s wildness.

Laura recalls how they escaped from the corporate life to build a homestead of their own in the country. They learned about wilderness life. They hiked. They wrote. And they developed a passion for conservation. “Modern life for us was hiking and climbing,” says Laura. The more they hiked the more they learned about the wilderness around them. Over time, those experiences were captured in words. Guy and Laura wrote five books together about being outdoors.

The Watermans were passionate about protecting the wilderness of Northern New England. They became stewards of two miles of trail near the summit of Mount Lafayette on the Franconia Ridge. “We never thought of it as easy or hard, we just felt such privilege of being able to take care of it,” says Laura.

Wilderness ethics was a big focus of Laura and Guy’s life and how it influenced their writing. “I think anyone who has done a lot of walking in the woods and on mountain tops wants everyone to enjoy it but with the right spirit behind it.”

Sitting on a bench and taking in the views from atop of Wright’s Mountain, Willem and Laura share a story they have in common, both lost their spouses and have had to learn to live without them. Guy died twenty years ago by ending his life near the summit of Mount Lafayette. “Guy had demons,” Laura explained.

A conservation fund honoring Guy was created to protect the alpine on Mount Lafayette. Conservation and protecting the environment is something Laura continues to be committed to today. “We’re lucky to have this natural scenery – it doesn’t get much better. Guy and I hope that by just being exposed to beauty and wildness, people would also feel that urge to keep it that way.”

Laura’s heart and soul is connected to the wilderness. “We’re lucky in the northeast to have what we’ve got, magnificent mountains and a trail system. People can pitch in and help and become stewards in many ways,” says Laura.

Watch this new episode of WINDOWS TO THE WILD on Wednesday, January 20th at 7:30pm on New Hampshire PBS and online anytime at nhpbs.org/windows.