Moving Through Grief: A Hiker Returns to the Mountains after the Death of Her Husband 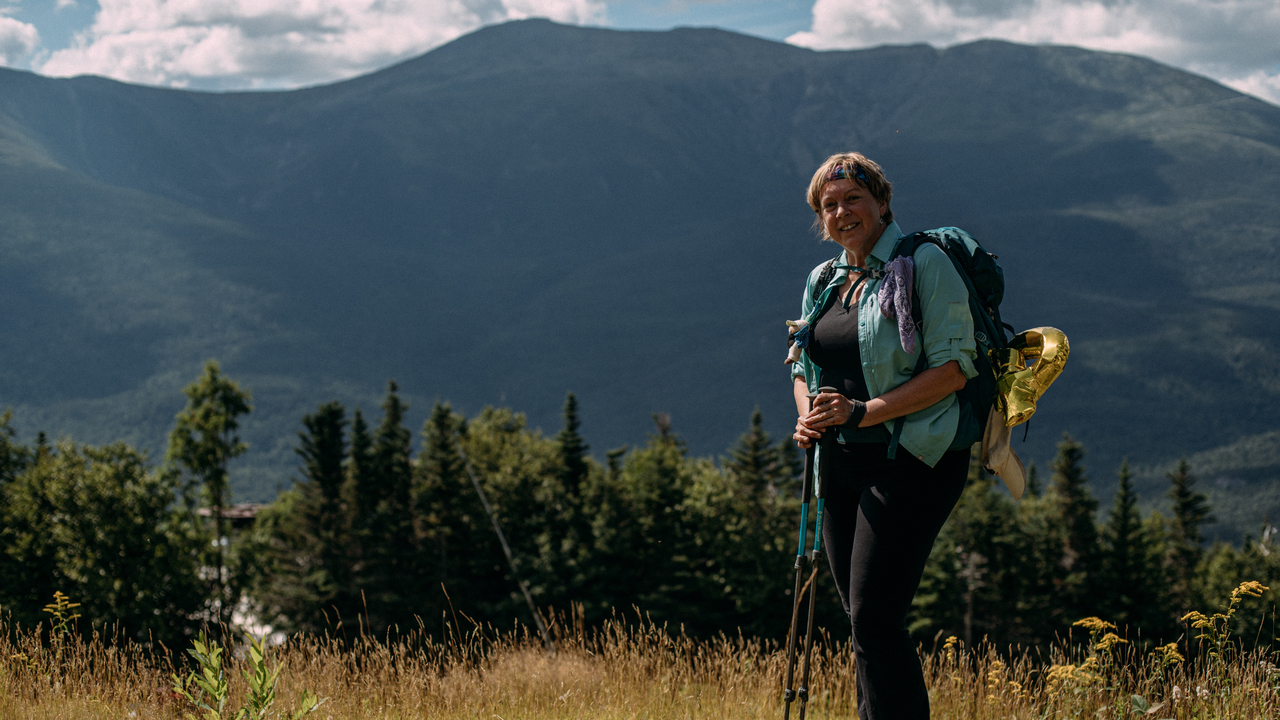 (Durham, NH, October 21, 2020) - When Rachael Caron first met her husband, Christopher Purinton, in 2007, the pair bonded over shared love of hiking. Over the years, they would be married in the White Mountains and spend vacations tackling the challenge of climbing all 48 of New Hampshire’s 4,000 foot mountains. But on their 43rd peak, only a brief walk from the summit, Chris collapsed from a cardiac event. He died later that day. Almost a year later, Willem Lange, the host of New Hampshire PBS’s WINDOWS TO THE WILD, joined Rachael and a group of supporters, as she climbed Wildcat Mountain, Rachael’s final peaks, in honor of Chris – a journey of healing that has been guided by extraordinary friendships.

Like so many couples, Rachael and Chris hiked as a way to spend quality time together. “It was all about building memories and trust and learning about each other,” Caron says. “It was a really good experience.” But after the trauma of losing her husband on the trail, Rachael was initially reluctant to return to the mountains. “I was terrified. I didn’t want to do it. I swore I wasn’t going to go back in the woods.”

It was Brenda Leary, one of the rescue workers who was called to help after Chris’s collapse, who convinced Rachael that the wild could be a place for her to work through her grief. The two women had stayed in touch after Chris’s passing and Brenda accompanied Rachael on her first days back on the trail. “It was a journey without part of her,” Brenda says of those early hikes. “It was Chris who was by her side, though all of it. If she struggled a little, Chris’s hand was there to help her, to steady her.”

WINDOWS TO THE WILD producer Phil Vaughn saw how Rachael’s friends stepped in to play that role of steadying hand for Rachael as she got back on the trail. “They not only seemed to encourage Rachael to return to the mountains” says Vaughn, “but offered the reassurance that they would be there to support her.”

Another of Rachael’s friends, Arlette Laan of Redline Guiding, says that those first hikes may have been difficult but they allowed Rachael the time, space and peace to begin to heal. “You have to take your time,” says Laan of the grieving process. “You have to move through the motions of feeling the fear and the sorrow. You have to work through it. You can’t just push it away.”

Lange, who lost his wife and frequent partner in outdoor adventure two years ago, saw some of his own experience reflected in Rachael’s. “When the worst we can imagine actually happens to us, we still have to go on,” he says. “The more creatively and actively we do it, the better. That’s also a tribute to our lost partner.”

After completing her 48th peak, Rachael acknowledges that her new journey is just beginning. “I’m going to continue to live every single second of every single day, because I know how quickly it can leave you." Hiking will continue to be a part of that journey. “Getting back out here is what helped me,” Rachael says. “Nature helps everybody, if you let it.”

You can hear more about this healing journey up to Wildcat Ridge on the next episode of WINDOWS TO THE WILD, premiering Wednesday, October 28th at 7:30 pm on New Hampshire PBS and online anytime at nhpbs.org/windows.