A New Lease on Life from an Old Love of Nature 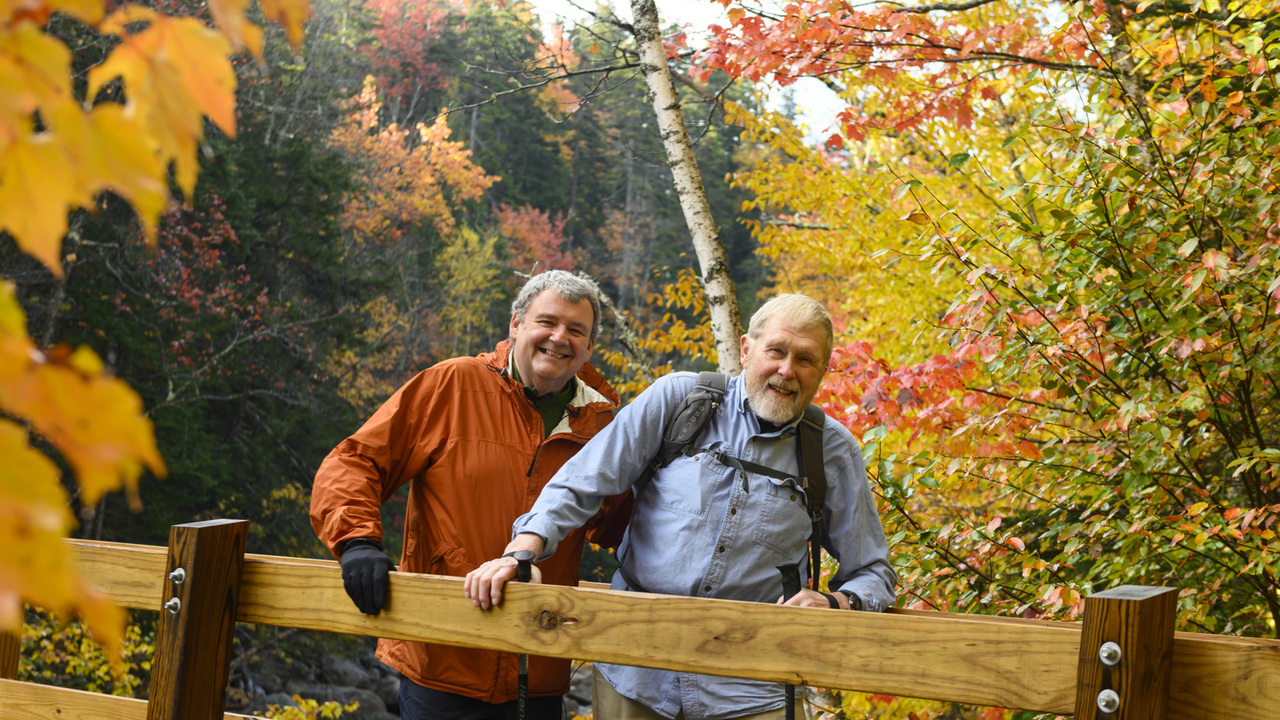 “My recovery started because I missed this. I just missed being out here,” New Hampshire author Tom Ryan tells his friend, WINDOWS TO THE WILD host Willem Lange.  As he speaks, he marvels at the spectacular fall foliage of the Sawyer Pond Trail, near Lincoln, NH. After a series of health problems that included a stroke, a heart attack, kidney failure and lung disease, Ryan – long an avid hiker known for taking to the trails with his beloved dogs ­– worried that his best days in the outdoors were behind him. Instead, his struggles have given him a new appreciation for the richness of the wild and the healing power of nature.

Ryan didn’t begin hiking regularly until he was in his forties, but after a trip to the White Mountains with his brothers he says he found the quiet of nature addicting.  He tells Lange, “I never feel lonely in nature, just like I’m never lonely in a book.”

For Lange, the outdoors has also provided a salve to loneliness since losing his wife Ida in 2018. He admits that “getting out and seeing people just feels like too much trouble sometimes,” but he always makes time for a walk in the woods with his terrier mix Kiki, averaging about a mile and a half a day.

Appreciating nature, whatever limitations you might be experiencing, has long been a value shared by Lange and Ryan.  Over the years, Lange has dealt with knee replacements and Ryan has been gradually improving his health to the point where he can begin hiking New Hampshire’s 4,000 footers again. As Ryan worked on regaining his strength, he kept in mind the example of his dog Will, a schnauzer who accompanied him on his earliest hikes. Though blind and deaf, Will loved going on hikes, experiencing the beauty around him fully, even if he couldn’t see it or hike it himself (Tom either carried or pushed Will up the mountains).

On this sunny fall day, Ryan revels in every detail – the smells, the sights, and the sounds of their journey. “One of the things about my health coming back is the appreciation of this stuff,” he says, gesturing to the surrounding forest. “I find myself looking up at the foliage and it’s like seeing anew.”

You can hear more of Willem and Tom’s thoughts on the therapeutic nature of the wild as they hike Sawyer Pond Trail with their dogs Samwise, Emily and Kiki on the next WINDOWS TO THE WILD episode airing Wednesday, January 15 at 7:30 pm on New Hampshire PBS and online at nhpbs.org/windows.