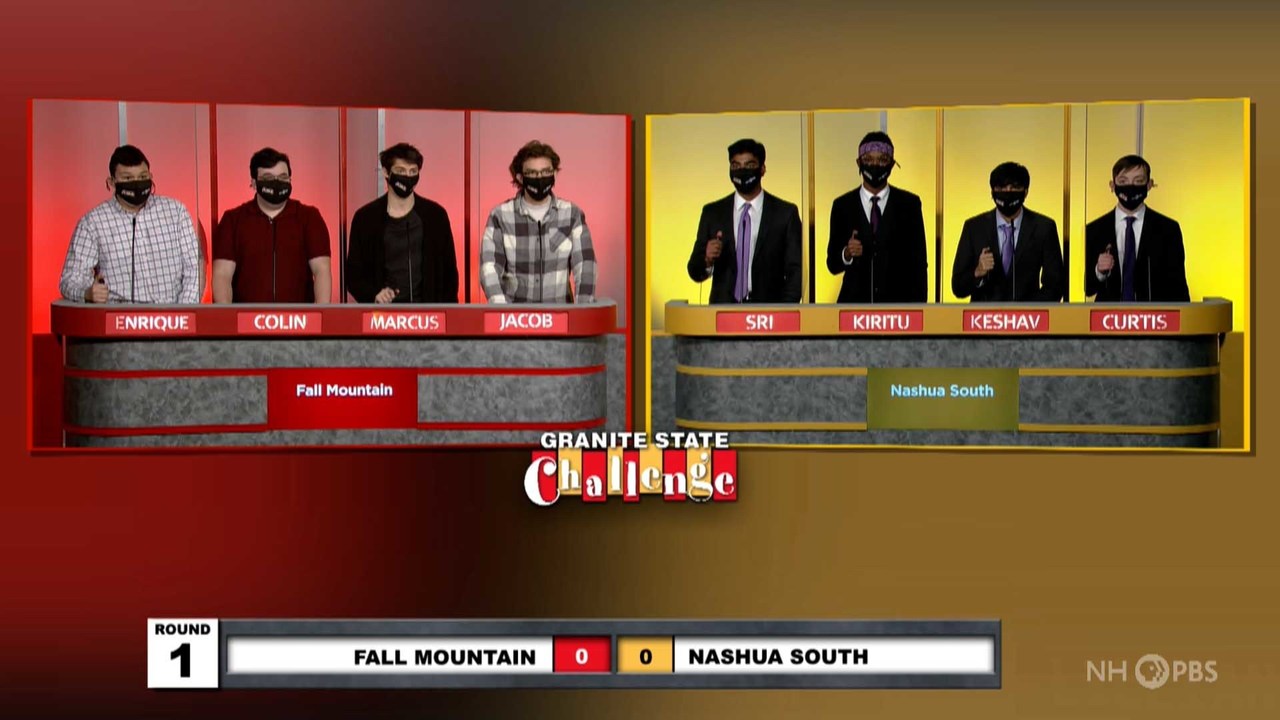 In the first round of the game, correct answers are worth 10 points and there is no loss of points for incorrect answers. Both teams were stumped by the first question of the round, The team from this country marches in first at the opening ceremony of the Olympics. The answer was Greece. Nashua's Keshav Rangan answered the next question correctly and identified North Carolina as being the state known as both the Old North State and the Tarheel State. Marcus Flynn of Fall Mountain picked up ten points on the next question about businessman and inventor Tony Stark,  who first appeared in Marvel Comics in 1963.  Enrique Ingram-Mendez answered the next question about the athlete who has the most Olympic medals with 28, Michael Phelps, adding 10 points to the board for Fall Mountain. Both teams played a strong first round, but at the end of the round, Nashua South lead by a score of 130-70.

In the second round of the game, correct answers are worth 20 points and there is no loss of points for incorrect answers. The second round also usually has two questions worth 40 points -  the 40 for 40 Question from a past season of Granite State Challenge, which celebrates the 40th season of the game, and the Unitil Power question.  Sri Korandla of Nashua South picked up the first 20 points of the round by knowing that the 2012 album 21, which won six Grammy Awards, was by Adele. He picked up another 20 points for his teams with a question about the Trail of Tears. The next question was the Unitil Power Question - Brothers Malcolm and Angus Young founded this band, known for songs like Back in Black and Highway to Hell in Sydney, Australia in 1973.  Sri picked up 40 points for his tram by knowing that band was AC/DC and Nashua South had a 190-70 lead. Curtis Newton picked up another 20 points for Nashua South by knowing that according to the proverb, you shouldn't look a gift horse in the mouth and then went on to pick up another 20 points for Nashua South by correctly naming Penicillin as the antibiotic discovered in 1928 by Scottish scientist Alexander Fleming, and Nashua South jumped out to a commanding 230-70 lead. Colin Regan picked up 20 points for Fall Mountain by identifying a muffler as either part of the exhaust system of a car or something your might wear around your neck to stay warm,  The next question was the 40 for 40 question from season 31 -  In his Gettysburg Address, Lincoln uses the phrase four score and seven years ago. How many years are in a score?  Curtis Newton of Nashua South picked up the 40 points by knowing that there are 20 years in a score. Colin Regan and Jacob Bradly picked up 40 points from Fall Mountain with questions about what danced in the head of the sleeping children in the 1826 poem, "A Visit from St. Nicholas", by Clement Clark Moore and that double Dutch is a form of jump rope that features two ropes, two turners, and at least one jumper, At the end of the round, Nashua SOith lead by a score of 290-190.

The third round of the game is the Three Strikes and You're Out Round. Each team picks a 10-question category and each team member, starting with the captain, gets one question. The team continues to answer questions until they miss three questions. Each team also has three passes in each round.  If a team answers all 10 questions correctly, they pick up an additional 10 points. Fall Mountain chose the category Fruits and Vegetables. All of the answers in the category would include the name of either a fruit or a vegetable.  They missed on questions about the children's book Blueberries for Sal, and the movies A Raisin in the Sun and A Clockwork Orange, They answered four questions correctly and picked up forty points. Nashua South picked the category Guess Who in which all of the answers would include the word who or the sound who.  The team missed on a question about the band, The Who,  Nashua South picked up 80 points and at the end of the round led by a score of 390-230.

In the final round, correct answers are worth 20 points, but an incorrect answer will cost a team 20 points and leads can be quickly lost or gained. Fall Mountain came out strong and answered the first six questions of the round correctly and tightening the score to 370-350 after Nashua South lost 20 points on a question.  Nashua South missed a question about stalactites, incorrectly saying stalagmites and Fall Mountain picked up the points for the question and  Fall Mountain led the game by a score of 390-370. With one minute left in the game, Fall Mountain led by a score of 410-390.  They couldn't hold on to their lead, losing 20 points on one question and not able to answer any of the remaining questions correctly.  Nashua picked up 60 points in the final second and won the game with a score of 450-390.