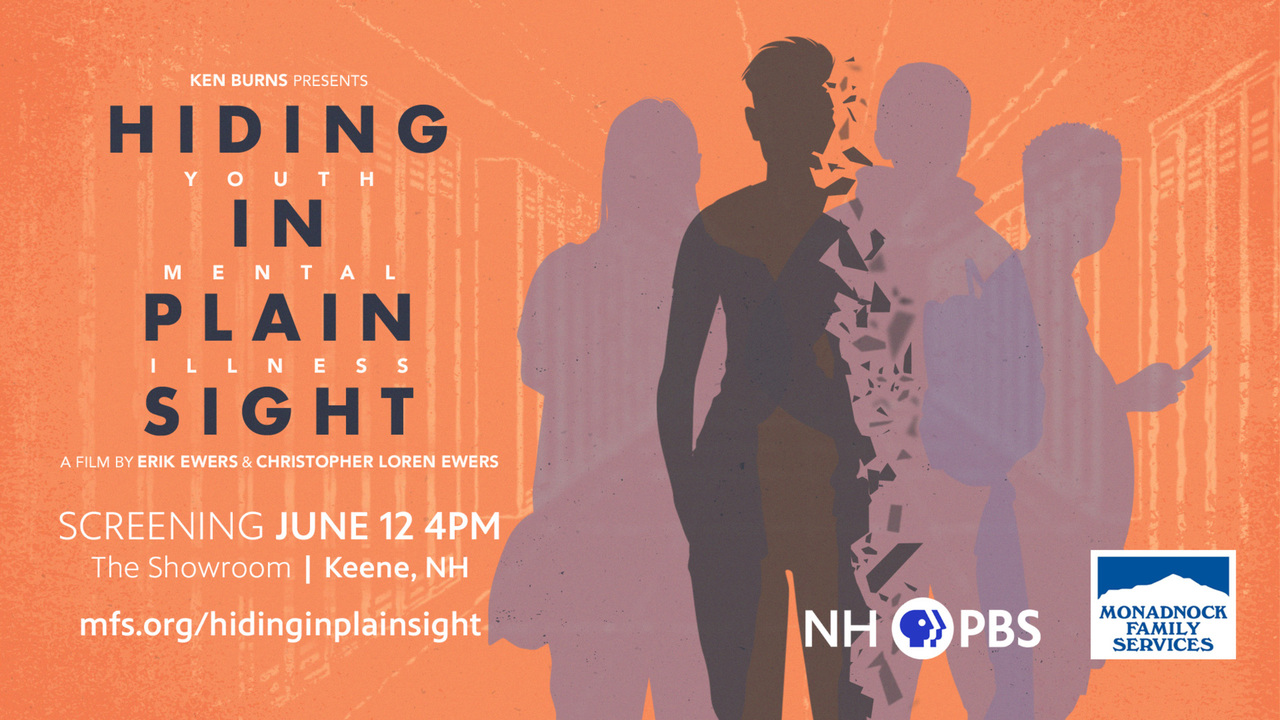 The documentary, premiering June 27 and 28 at 9 p.m. on New Hampshire PBS, will shine a clear – and sometimes stark – light on what it is like for youth as well as for the parents, teachers, friends and healthcare providers who try to help. The film presents an unvarnished window into daily life with mental health challenges, from seemingly insurmountable obstacles to stories of hope and resilience. Through the experiences of these young people, the film confronts the issues of stigma, discrimination, awareness, and silence, and, in doing so, help advance a shift in the public perception of mental health issues today.

On June 12, the public is invited to a free screening a powerful half-hour preview of the documentary. Following, our panel, including the film makers as well as a young person receiving support from MFS and mental health experts, will explore the unprecedented mental health challenges our young people are facing, and what we can do to help.

“Hiding in Plain Sight: Youth Mental Illness gets to the heart of what is happening to many of our children today,” says Peter Frid, New Hampshire PBS President and CEO. “This documentary and the screening with Monadnock Family Services is just the first step for all of us to help young people struggling with mental health issues.”

“Now more than ever, we need to listen to young people. They are facing unprecedented challenges that are having a direct impact on their mental health” states Phil Wyzik, CEO of Monadnock Family Services. He goes on to say, “We are thrilled that this important documentary will help to spark conversation about the mental health of our youth.”

For more information and interview requests, please contact the MFS Development Department at development@mfs.org or by calling (603) 338-0052 or at mfs.org/hidinginplainsight.

Film Producer Julie Coffman graduated from Savannah College of Art and Design and worked as a graphic designer for ten years before joining Ewers Brothers Productions. At EBP, she has produced numerous films including: Coke Zero: Sam’s Story; American Academy of Arts and Sciences; The Residue Years (based on the novel by Mitchell Jackson); Colby College; and Walden.

In 2015 she joined Florentine Films in collaboration with EBP and Ken Burns. She produced The Mayo Clinic: Faith, Hope, Science, a feature length documentary which premiered on PBS in 2018.

Currently, Julie is at work with Ken Burns and Ewers Brothers Productions on a multi-film series exploring our mental health crisis, with the first film slated for broadcast in 2022.

Co-Director and Editor Erik Ewers has worked with documentary filmmaker Ken Burns for more than 30 years, including nearly all of his single and multi-episodic films. He currently serves as Ken’s senior editor and as co-director and editor of Ewers Brothers Productions, a preferred collaborative company in the co-creation of Ken’s films.

Erik has been nominated for more than seven personal and program Emmy Awards and has won one editing Emmy and three program Emmys, as well as two prestigious ACE Eddie Award nominations and one ACE win for “Best Edited Documentary of 2015.” Erik is an expert in all aspects of filmmaking, having served as music producer, writer, director, film producer, picture editor, and sound effects, music, and dialogue editor.

In 2015, Erik collaborated with Ken to create the two-hour PBS film The Mayo Clinic: Faith, Hope, Science, serving as producer, director and editor. Their partnership continues in an upcoming miniseries on America’s mental health crisis.

Christopher Loren Ewers, Co-Director and Director of Photography has been working behind the camera for over 20 years. He studied cinematography at Boston University and photojournalism at the New England School of Photography, and has traveled the world exploring the human experience through the lens. His eclectic work includes a variety of subjects, formats and collaborators, from national networks like NBC and PBS to Fortune 500 brands like Apple, Coca-Cola, and IBM and to nonprofit organizations like the American Academy of Arts and Sciences and the Clinton Global Initiative.

However, it’s the unique mix of Chris’s film and journalism backgrounds that puts documentary filmmaking at the center of his work. His cinematography has been featured in each of Ken’s films since The Vietnam War.
Working with Ken as executive producer, Chris co-directed and served as Director of Photography on feature length documentary, The Mayo Clinic: Faith, Hope, Science, broadcast nationally on PBS in September 2018. He and brother Erik are currently co-directing a series of films exploring the mental health crisis, scheduled to air on PBS over a ten-year period beginning in 2022.

Katherine originally joined the MFS team in 2011 after working at a Federally Qualified Health Center in rural Maine. She worked in various leadership positions at MFS until 2014. Katherine was most recently the Chief Program Officer at the Center for Human Development, the largest social service agency in Western Massachusetts. Katherine returned to MFS in 2021 and is grateful to be working to support the mental health needs of her local community.

Phil Wyzik has been the CEO of Monadnock Family Services since 2021, the designated community mental health center in the greater Cheshire County. Prior to this, he was the President and CEO of the Mental Health Association of Connecticut. He also worked for 17 years as VP of Operations for West Central Behavioral Health in Lebanon.

Beginning his mental health career in 1986, he has previous professional experience as an therapist, addiction counselor, teacher, and religious education coordinator. He has been a certified trainer for Adult and Youth Mental Health First Aid and for the Signs of Suicide Prevention program for middle and high school students.
He is the current Chair of the Leadership Council for a Healthy Monadnock and has collaborated in the publishing of 10 professional journal articles and published numerous Op Ed articles in Regional newspapers. He has completed 15 presentations at mental health conferences in the US. His most recent publication is a work of fiction entitled Pushed Down, Then Out.