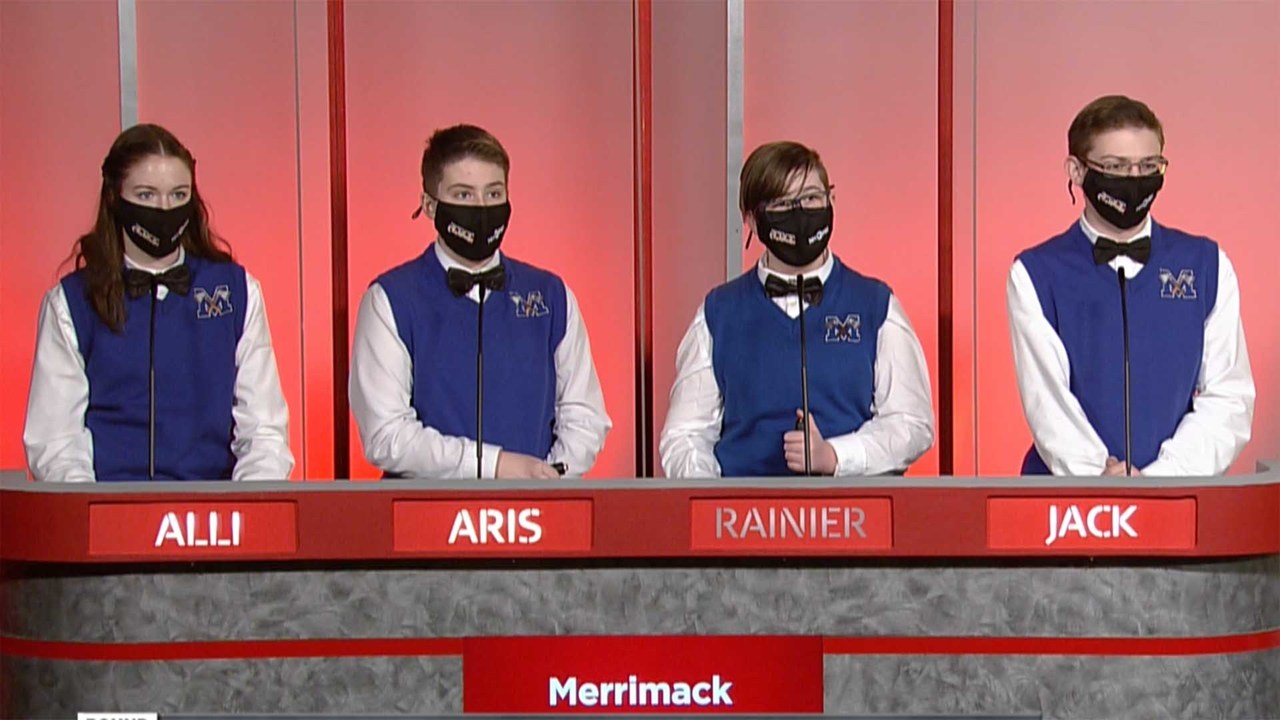 In the first round of the game, correct answers are worth 10 points, and there is no loss of points for incorrect answers. Natalie Boyer of Plymouth kicked off the game by correctly naming the piccolo as the instrument that looks like a half-sized flute with the same fingerings. Katherine Luehrs put 10 more points on the board for Plymouth by knowing that there are 13 cards of each suit in a deck of cards, and Khalil Dahklia picked up 20 more points for Plymouth by identifying Bob Marley as the singer who claimed that he didn't shoot the deputy in a 1973 song and then identifying Charlemagne as the first Holy Roman Emperor. Ranier Murray picked up the first points for Merrimack by knowing that the hit Rhianna song, "Umbrella" was originally written for Britney Spears, bringing the score to 40-10. Team captain Jack Pikora picked up another 10 points for Merrimack by naming Bruce Banner as the mild-mannered physicist who turns into the Hulk when agitated, and Aris Corman-O'Reilly picked up another 10 for the team by naming chess as the game at the center of the series The Queen's Gambit. Both teams missed the next question about Sophocles's tragedy Antigone. Both teams played aggressively and with a minute left in the round, Merrimack held a slim 10 point lead with a score of 140-130. Plymouth captain Dashua Ough tied the score by answering a question about the game Scrabble. Jack Pikora of Merrimack knew that St. Helena island, where Napolean was exiled in 1815, was located in the Atlantic Ocean. Rainier Murray of Merrimack knew that Miss Piggy is the karate-chopping porcine in love with Kermit the Frog, bringing the score to Merrimack 160 and Plymouth 140. The last question of the round was the Unitil Power question, worth 20 points. Natalie Boyer of Plymouth picked up the 20 points by correctly naming Billy Elliot as the play for which Elton John and Lee Hall wrote the song "Electricity."

In the second round of the game, correct answers are worth 20 points and there is no loss of points for incorrect answers. The second round also includes the 40 for 40 Question from a past season of Granite State Challenge, which celebrates the 40th season of the game. Jack Pikora of Merrimack kicked off the round by naming Zimbabwe as the last country in an alphabetical list of countries. Khalil Dahklia of Plymouth correctly answered a question about Oscar Wilde,  Jack Pikora of Merrimack answered a question about the Boxer Rebellion and Alli Pikora of Merrimack knew that scurvy was caused by a deficiency of vitamin C. Both teams missed on a question about singer-songwriter Lionel Ritchie, but Merrimack's  Aris Corman-O'Reilly knew that Tom Brady asked retired tight end, Rob Gronkowski, to join him on the Tampa Bay Buccaneers. The next question was the 40 for 40 Question from season 32 of Granite State Challenge.  Katherine Luehrs of Plymouth correctly named iron as the type of metaphorical curtain that separated political alliances in Europe, post World War II, bringing the score to Mrrimck 240 and Plymouth 220. At the end of the round, the score was Merrimack 340 and Plymouth 280.

The third round of the game is the Three Strikes and You're Out Round. Each team picks a 10-question category and each team member, starting with the captain, gets one question. The team continues to answer questions until they miss three questions. Each team also has three passes in each round.  If a team answers all 10 questions correctly, they pick up an additional 10 points. Plymouth chose the category Boo. All of the answers in the category were related to ghosts. The team got four out of ten, missing on questions about Field of Dreams, Banquo, and The Flying Dutchman. Merrimack chose the category Mask Up. All of the answers in the category were related to masks. Merrimack answered eight questions correctly, missing only questions about Zorro and Hannibal Lecter. At the end of the round, Merrimack had a lead of 420-320.

In the final round, correct answers are worth 20 points, but an incorrect answer will cost a team 20 points and leads can be quickly lost or gained. Alli Pikora put the first 20 points on the board for Merrimack by knowing that a trunk could be where you keep a spare tire or the proboscis of a large mammal.  Khalil Dahklia of Plymouth came back with the formula for finding the area of a circle.  The teams went back and forth with correct answers and with one minute left in the game Merrimack led by a score of 560-460. Despite aggressive play in the final minute of the game, Plymouth couldn't close the gap, and Merrimack won by a score of 560-500.

Merrimack now moves on to face  Nashua South High in the semifinal round.