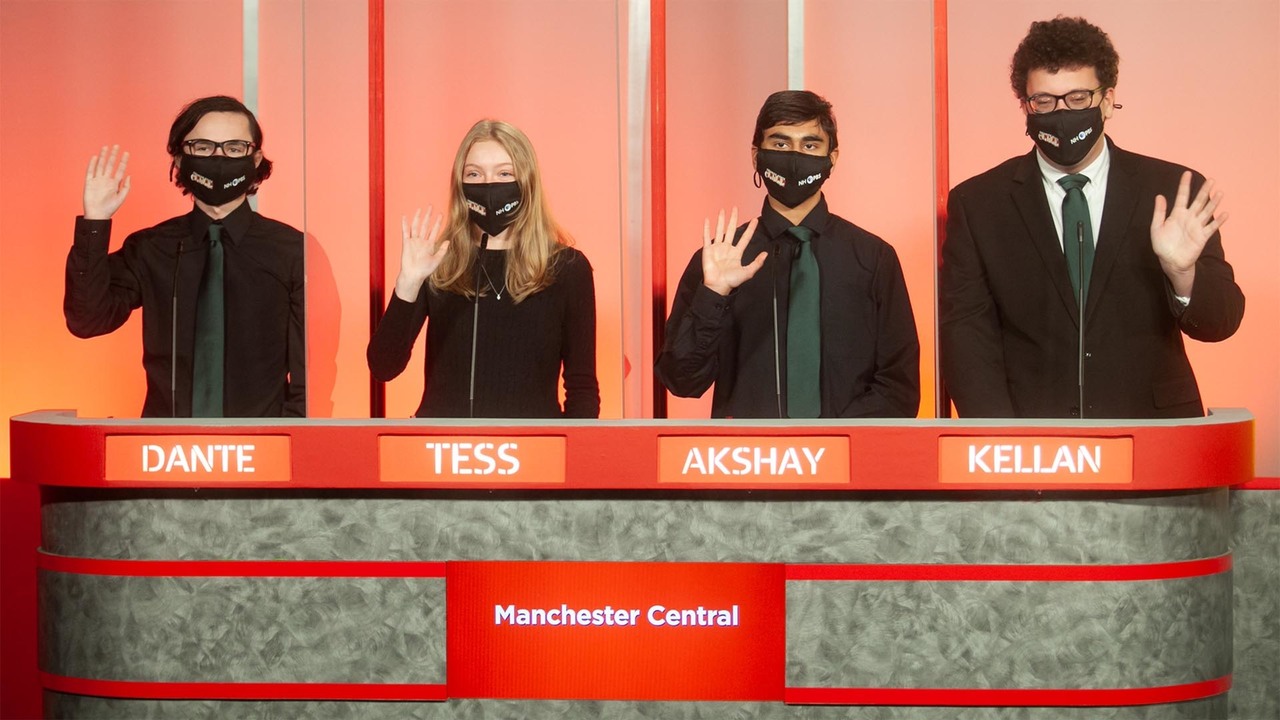 The first round, where correct answers are worth 10 points and there is no penalty for incorrect answers, was kicked off with Kellan Barbee naming the roadrunner as the state bird of New Mexico picking up 10 points for Manchester Central. Akshay Manchanda picked up 10 more points for Manchester Central answering a question about Sisyphus, the king of Ephyra, who was cursed by Zeus to fruitlessly roll a rock up a hill for eternity. Valerie McDonnell picked up Salem's first 10 points answering a question about the Blarney Stone correctly.  Kellan Barbee picked up the next 10 points for Manchester Central correctly naming the Mennonites as the Christian group named for Roman Catholic priest and anabaptist leader Menno Simons. Bianca Pichardo came right back and added 10 points to Salem's total by knowing that Amala Ratna Zandile Dlamini, is better known by the name Doja Cat. Although Salem played a strong first round, Manchester Central lead by a score of 160-80 going into the second round.

In the second round, correct answers are worth 20 points and there is no penalty for incorrect answers. The second round also contains two questions worth 40 points, the Unitil Power Question and the 40 for 40 question, which features a question from a past season of Granite State Challenge in celebration of the 40th season of the game.  Akshay Manchand of Manchester Central picked up the first 20 points in the round by correctly naming the four states of matter -solid, liquid, gas, and plasma. Kellan Barbee of Manchester Central and Donovan Homsey of Salem both took a shot at the Unitil Power Question, but neither could identify the electric eel as the freshwater fish that Michael Faraday tested the properties of. Kellan Barbee went on a streak and answer the next four questions correctly. John Medeiros of Salem broke the streak by correctly naming theTony as the award named after director and co-founder of the American Theatre Wing, Antionette Perry, and then knowing the Virgil wrote the epic poem Aeneid. John also picked up 40 points for Salem by correctly identifying the microscope as the scientific instrument whose name is taken from the  Greek for "small look" in the 40 for 40 question from season 33. Donovan Homsey of Salem picked up 20 points at the end of the round knowing that a teacup named Chip was a character in the movie version of the fairy tale, Beauty and the Beast. At the end of the round, Manchester held the lead with a score of 320-240.

The third round of the game is the Three Strikes and You're Out Round. Each team picks a 10-question category and each team member, starting with the captain, gets one question. The team continues to answer questions until they miss three questions. Each team also has three passes in each round.  If a team answers all 10 questions correctly, they pick up an additional 10 points. Salem picked the category "It's War." All of the answers in the category were words that began with the letters w-a-r.  Salem answered all 10 questions correctly, the first team to do that in the season, and picked up 110 points. Manchester Central chose the category "Lucky Seven" all of the answers in the category included the word or number seven.  Manchester Central picked up 40 points in the round, missing on questions about House of the Seven Gables, Seven Samuari, and Feast of the Seven Fishes. At the end of the third round, Manchester led by a slim 10 points with a score of 360-350.

In the final round, correct answers are worth 20 points, but an incorrect answer will cost a team 20 points and leads can be quickly lost or gained.  Dante Parsons opened the round by naming Mike Pence as a former talk-show radio host and governor of Indiana. Valerie McDonnell of Salem came right back and named Medusa as a gorgon with snakes on her head. Salem took the lead when John Medeiros correctly answered a question about the inventor Guglielmo Marconi. Kellan Barbee of Manchester Central put his team back in the lead by answering questions about dolphins and the youngest hot of Saturday Night Live, Drew Barrymore, who hosted when she was just seven.  Tess Beckman added another 20 points to Manchester Central's score by naming sugar as a compound made up of 12 carbon atoms, 22 hydrogen atoms, and 11 oxygen atoms. Donovan Homsey of Salem picked up a quick 40 points for Salem correctly answering questions about the movies Frozen and Titanic, and his teammate, John Medeiros, added another 20 points with another movie question, this one about the 2018 film, Black Panther, putting Salem in the lead with a score of  450-440. The round was well-played by both teams, but in the end, Manchester Central won the game with a score of 540-490.

The winner of the match will face either Londonderry High or Winnacunnet High in the quarterfinal round.