Teaching the Art of Civil Discourse 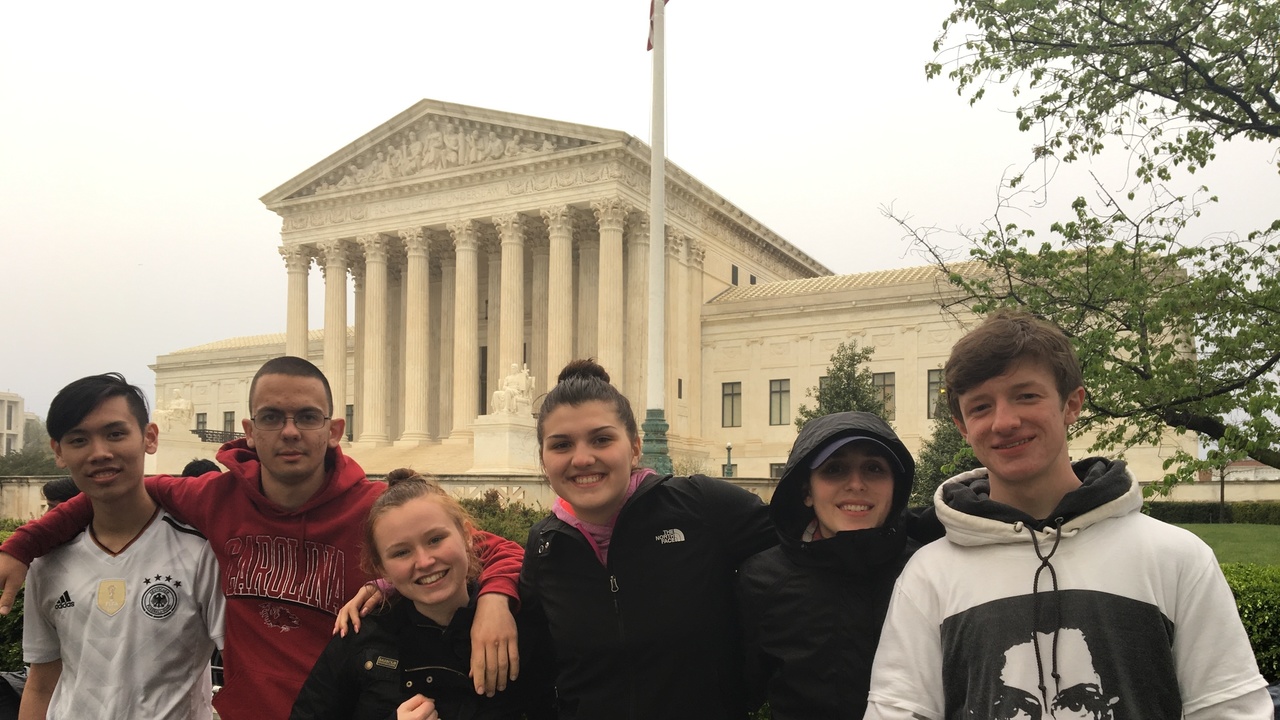 For Dave Alcox, a retired Milford High School social studies teacher and former president of the New Hampshire Council for the Social Studies, teaching civics centers on helping to shape better citizens. And in today’s heated political climate—where contrarianism and emotional outbursts fill social
media and cable news channels—this means a lot more than simply being able to pass a civics test, he says.
Alcox, who retired in 2020, taught a civics education course called “We the People: The Citizen and the Constitution,” for 23 of his 25 years in the classroom.
The course—which culminates in a series of simulated congressional hearings with other high schools that are judged by volunteer attorneys and judges—is designed to enhance understanding of the institutions of American constitutional democracy, the relevance of the Constitution, and the Bill of Rights.
One of Alcox’s many students over the years whom he says embodies the essence of the program is 2008 Milford High School graduate Israel Piedra. Piedra, 31, graduated from Bates College and Boston College Law School and was elected to the New Hampshire Legislature in 2018.
“Israel captures the essence of the We the People program—not because he’s an attorney or a member of the legislature—but because of his commitment to his community,” Alcox says. “He not only learned the program but enacted it. I’m extremely proud of what he has done with it. Every year, he always showed up to help as a coach or at local elections because I think he felt it was his duty. To me
that’s the citizen component: Giving back to community and the classroom. Israel is amazing at that.”
Piedra, who works for the law firm of Welts, White and Fontaine in Nashua, says the We the
People class was the primary reason he became a lawyer.
“We the People class – and our excellent teacher Dave Alcox – made me excited to learn about
government and the Constitution, and I decided then and there that I would go to law school after I
graduated college,” he says.
Alcox, who retired with multiple “We the People” state championships under his belt, says he
has been enjoying his retirement but also continues to do civics education work.
As a teacher, Alcox emphasized the importance of civic responsibility through real-life
experiences, such as trips to Washington, D.C., or familiarizing his students with famous First
Amendment cases like Tinker v. Des Moines Independent Community School District, decided in 1969 in
favor of several students’ right to protest the Vietnam War by wearing black arm bands in school.
Civics education programs such as “We the People,” Alcox says, are helpful tools for students to
learn about civil discourse and the creation of law. He wishes more schools would adopt the program.
“I’m shocked more districts aren’t doing programs like this, especially in today’s day and age
where we have such a dichotomy of ideas. You look at how people are being ripped apart in
conversations involving politics. It’s gotten to the point where if ‘you don’t take my point of view then
you’re wrong,’” Alcox says. “These types of programs teach people they can have a respectful political
dialogue without believing someone always has to win or lose.”
Alcox isn’t a supporter of mandatory civics requirements such as those embodied in HB 320 that
passed in late July because their focus, he says, is on passing a test and not active participation in
shaping civil society.
HB 320 will require New Hampshire students to pass a naturalization exam developed by the U.S.
Citizenship and Immigration Services before they can graduate high school.

“Anyone can pass a test, but the purpose of civics programs is to get people actively involved,”
Alcox says, explaining that the notions of communitarianism and civic virtue are a distinct part of
classical republican philosophy.
“When Alexis de Tocqueville wrote Democracy in America, the things he was most blown away with
were the voluntary associations. That’s what makes democracy work. It’s not just the three branches of
government.”
Alcox points to his own town of Milford as a common example of a small town lacking
widespread community participation. Of the 11,000 eligible voters in Milford, he says only 15 to 18
percent vote in primaries.
And when it comes to school and town budgets—decided during the town’s deliberative
sessions each spring—the allocation of more than $57 million is decided by fewer than 300 people.
“That’s obscene,” he says.
Alcox is pleased that another Milford High graduate, Thomas Lundstedt, took over the We the
People class at the school this year.
Lundstedt is a social studies teacher who took Alcox’s We the People course and graduated in
2012.
“To go through as a student and to work with Dave who passed the torch to me has been a really
rewarding experience. And it’s been a pleasure talking with students,” Lundstedt says. “It’s a really
important program and I wish more schools could participate.”
Looking back, Alcox says one of the most important aspects of teaching the course was the
personal relationships he established with his students.
“In 25 years of teaching, I taught ‘We the People’ for 23 years and without a doubt it was the
program that lifted me up and made me come to school brighter. It produced so many wonderful things
with the kids.”
The district hearings for “We the People” will be held Dec. 10, from 9 a.m. until noon. The State
Finals, held at the City-Wide Community Center in Concord, are scheduled for Jan. 14. For more information, visit the New Hampshire Bar Association’s website at nhba.org or contact NHBA Law Related Education Coordinator, Robin Knippers at reknippers@nhbar.org.

These articles are being shared by partners in The Granite State News Collaborative.
For more information visit collaborativenh.org.

COURTESY PHOTO: A group of Milford High School students from Dave Alcox’s We the People class stand near the Supreme Court building in Washington, D.C. in June, 2018. Students were able to hear the landmark Trump v. Hawaii case that involved travel restrictions and immigration.