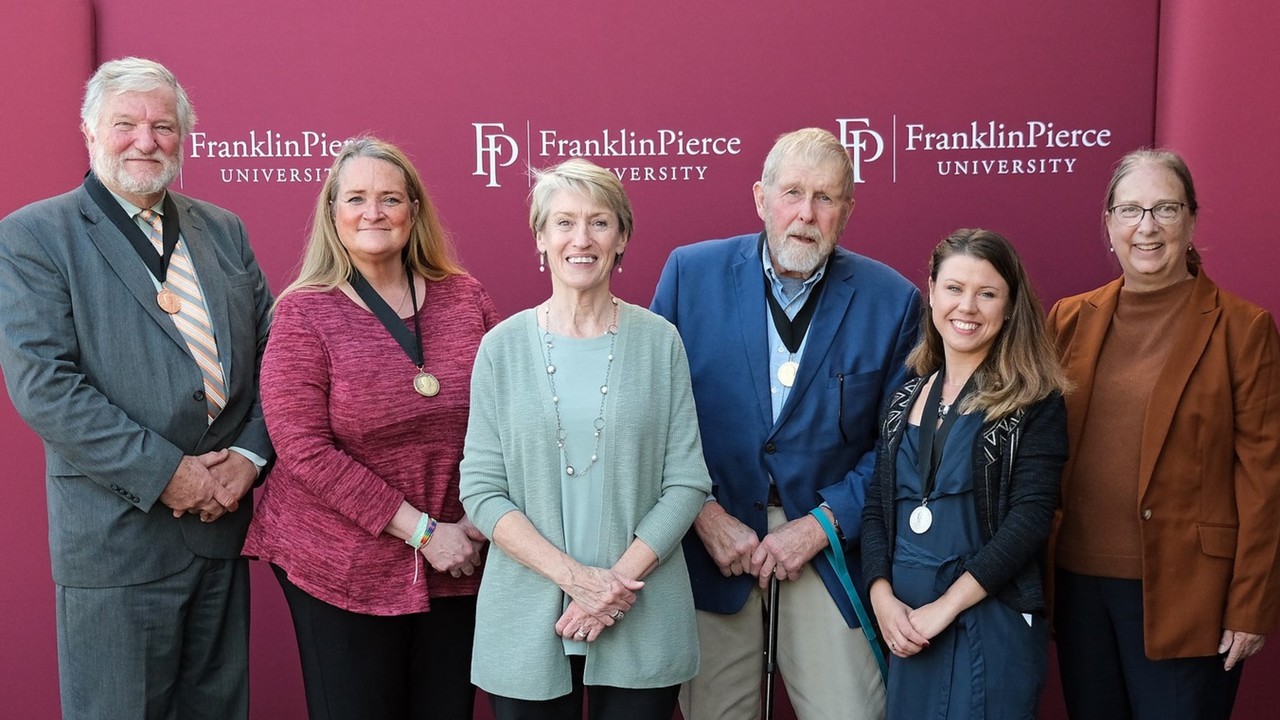 RINDGE, N.H. – October 8, 2021 Franklin Pierce University held its annual Fitzwater Center Honors ceremony on Thursday, October 7 bestowing Fitzwater Medallions upon select honorees at an event on the Rindge Campus. The Fitzwater Medallion for Leadership in Public Communication is presented annually to those who have demonstrated a commitment to using the power of collaboration to ensure the health of our democracy. Established in 2004, the Fitzwater Honors is the hallmark event of the Marlin Fitzwater Center for Communication at Franklin Pierce University.

“The University is honored to award the Fitzwater Medallion to four leaders in public communication,” said Kim Mooney ’83, president of Franklin Pierce. “As the University prepares to celebrate its 60th Anniversary and the Center’s 20th Anniversary in 2022, we are proud that the Fitzwater Center, under the leadership of Dr. Kristen Nevious, continues to be a world-class center for teaching civic engagement through public communication.”

• Tyler Comeau ’20, Graduate Student, UCLA School of Theater, Film and Television, Fitzwater Medallion for Contributions to the Public Discourse by a Graduating Student

The renowned NHPBS host of the award-winning “Windows to the Wild,” Willem Lange is known throughout New England and the country as the consummate outdoorsman. His exploration of our region’s natural wonders has won him fans of all ages. He also writes A Yankee Notebook, a weekly newspaper column, and he's published 10 books. His newest book, Words from the Wild, is a collection of 28 illustrated essays—drawn from his columns—that highlight his adventures on Windows to the Wild. In addition to hosting Windows to the Wild series, Willem is the host of five NHPBS birding documentaries that have won New England Emmy, Telly, and New Hampshire Association of Broadcasters awards.

“It’s an honor,” said Lange when asked how he felt about receiving the Fitzwater Medallion. “Of all things, I’m at a loss for words. It’s an honor to be singled out this way.”

David Tirrell-Wysocki, recipient of the Fitzwater Medallion for Contributions to the Public Discourse by an Educator, shared in his remarks that the date of the ceremony held personal significance. “Receiving this wonderful award on this date brings a long career full-circle. It was on October 7, 1974, 47 years ago today, that I moved to New Hampshire [for my first job in journalism].” Mr. Tirrell-Wysocki recently retired as the executve director of the Nackey S. Loeb School of Communications. He started his career working at various N.H. radio stations before beginning a 33-year career as a reporter for the Associated Press in Concord, N.H.

Unable to attend the ceremony due to his graduate studies at UCLA, member of the class of 2020 Tyler Comeau’s mother, Dr. Jacqui Kelleher, accepted the Fitzwater Medallion for Contributions to the Public Discourse by a Graduating Student on his behalf. Dr. Kelleher praised Franklin Pierce for embracing and preparing her son for future success. “Thank you, Franklin Pierce University,” she said. “My kid came to you with strengths and skills and you found them and you nurtured them. …He left [Franklin Pierce] with a clearly articulated vision for how to leave his mark on this world.”

“I am honored to accept this medallion amongst good company,” said honoree Erika McGowan ’09. “I hope this recognition is a reminder for us to be grounded in communication and to continue forward in our respective journeys.” Erika graduated from FPU with a bachelor of arts degree in Mass Communication. Since 2014, she has worked at the Directors Guild of America.

The 20th Anniversary Fitzwater Honors Ceremony will he held in April 2022.

ABOUT FRANKLIN PIERCE UNIVERSITY
Franklin Pierce University is an accredited private university in New Hampshire that achieves outstanding student success through the integration of liberal arts and professional programs. The University includes a 1,200-acre residential campus in Rindge, N.H, as well as centers in Manchester, Lebanon and Goodyear, Ariz. Students in the College of Business, the College of Health & Natural Sciences and the College of Liberal Arts & Social Sciences earn degrees through the doctoral level in classroom-based and online programs. Franklin Pierce is a NCAA Division II institution, with 24 varsity athletic teams for men and women.