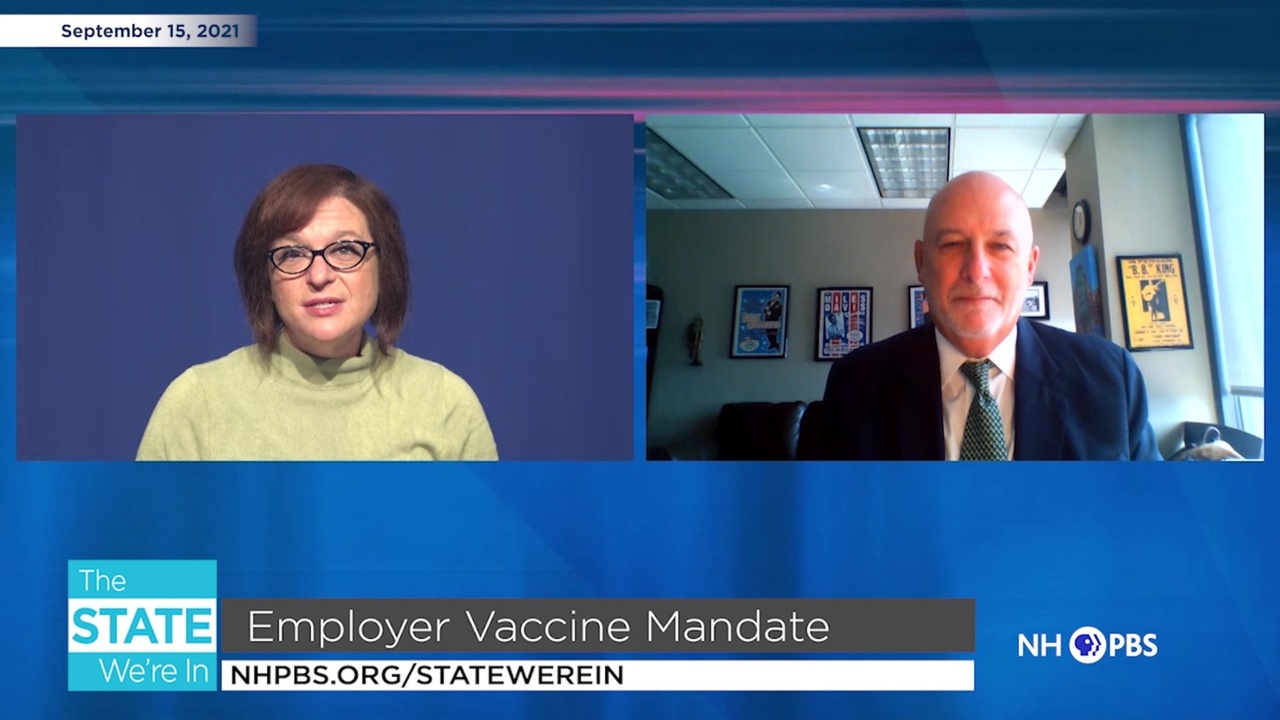 President Biden has issued new vaccine mandates that will call for employers with over 100 workers to require vaccinations or weekly tests. NH Labor Attorney Jim Reidy explains what the mandates might mean for New Hampshire businesses and residents with The State We’re In host Melanie Plenda.

Jim Reidy: The new vaccine mandate was announced on September 9th and it was actually two executive orders, but there is no date set for the regulation to come out from OSHA or its effective date. We do, however, expect the rule to come out within the next 30 to 60 days.

My recommendation in the meantime would be for private employers with a hundred and more employees to start putting together the infrastructure for testing, compliance with vaccination, or putting in place some mechanism for a procedure for testing.

Melanie Plenda: What are some of the most common questions you're getting from employers about this right now?

Jim Reidy: We've been flooded with questions since last week; does it apply to my workplace? How do they count the 100 employees? Is it full-time, is it part-time? Is it seasonal? Is it temporary? How far back do you look if I'm a federal contractor, does it matter how many employees I have? Do we go through the same exemption process for religious and medical exemptions and, further, can we terminate someone who just simply refuses to get the vaccine, or do they have to go through the opt out for testing?

Melanie Plenda: Do we have answers to many of those questions? Are there any answers that we do have that you could share with us now?

Jim Reidy: We don't have any answers yet, and we fully expect to get something from OSHA soon. At the same time, there are as many as 20 threatened legal challenges; everything from the mandate is unconstitutional, to it conflicts with state law, to it isn't consistent with CDC guidance, and so on. In the meantime, we have a couple of things that we know that for private employers with more than a hundred employees, depending upon how they're counted, are going to be required to have their employees either fully vaccinated by a certain date, or that the unvaccinated get tested weekly. Their employer will have to keep records of vaccination or testing.

Melanie Plenda: How do you determine the 100 employees figure? Can you talk us through that?

Jim Reidy: Typically they have a snapshot period of time that they look at for purposes of judging how many employees you have; typically it's full-time or regular employees, some statutes look at part-time employees over a certain number of hours per week, and some look at some long-term temp or seasonal employees. Another question comes up is, what if we have operations in this state and operations in several other states, are they all considered to be counted for purposes of the 100? I would guess at this point the answer is yes, it's an integrated employer test. If you have a singular headquarters or one tax identification number, you're likely to be deemed to be the same employer and they will all count together.

Melanie Plenda: You mentioned that there were about 20 lawsuits that are making their way through the courts. Is there any chance that that's going to delay the mandate taking effect or the rules taking effect at all? Or will that go ahead as the court cases proceed?

Jim Reidy: It's hard to say at this point. All I can point to is two things, and they're on opposite ends of the spectrum. The first is that OSHA has authority under what's called the emergency temporary standards (ETS), which means OSHA can adopt these standards to be in effect for, say, six months. These standards don’t go through formal rule-making procedures. In recent years, however, four of OSHA's ETS were vacated or stayed by courts for various reasons.

On the other side of the ledger, when employers on their own in the last six months had instituted their own mandates for the vaccine, there are at least four or five court decisions that sided with the employer as to the reasonableness of the vaccine mandate. In fact, the US Justice Department came up this summer and said, vaccine mandates are not illegal. Ultimately it will come down to whether the president had the authority to issue this mandate himself in an executive order that is so widely sweeping.

Melanie Plenda: Can you talk a little bit about what policies are currently in place for businesses, mask and vaccine wise? Is there anything written down or has it been sort of ad hoc?

Jim Reidy: Since the March of 2020, when we were first going into furloughs and layoffs, and then following was the CDC guidance with regard to masking. You had the Family First Corona Response Act (FFCRA) that provided for emergency sick leave and emergency family leave, and employers were getting tax credits for that; that was followed by the CARES Act, which on the one hand augmented unemployment benefits, but on the other hand tried to restore payrolls, all the while we've been on this regression of getting employees back to work - whether it's remote, in the office, or hybrid. With that, the CDC had its guidelines for masking, for temperature checks, for going through the questions of have you been exposed to someone who has had a COVID diagnosis? Do you have these symptoms? And so on.

The screening and the masking has been in place, but in May of this year the CDC came out and said if you're vaccinated, you don't have to wear a mask. We thought we were going back to normal again. Now with the variants, a lot of employers, including my own, have gone back to saying that even if you are vaccinated, please wear a mask again in common areas where you can not socially distance. Employers this summer were moving towards a vaccine mandate on their own, and then you had the president's executive order. We're moving back towards, say, November of last year where the COVID numbers were high and employers had to be ever vigilant about their safety policies.

Melanie Plenda: What's been the employer's reaction to the mandate? What have you been hearing from them?

Jim Reidy: Many employers were working with me to put in place a mandate so in some ways, they got covered or they were vindicated in their efforts. When they got pushback from their employees, they said, now we've got a federal mandate that was doing exactly what we wanted. A lot of employers are grateful for the backup, however companies like Kellogg, Campbell soup, Coca-Cola, and others have written letters to the White House saying, we need more clarity as to what this means and how it's going to be applied. Some are welcoming it, some are saying let me make my own policies and deal with my own workplace. The one important thing to remember is, again, as the economy has recovered, we have very low unemployment and some 10 million jobs on fill. Right now there is a suggestion that with a vaccine mandate, it's going to be harder to fill some jobs.

These articles are being shared by partners in The Granite State News Collaborative. For more information visit collaborativenh.org.