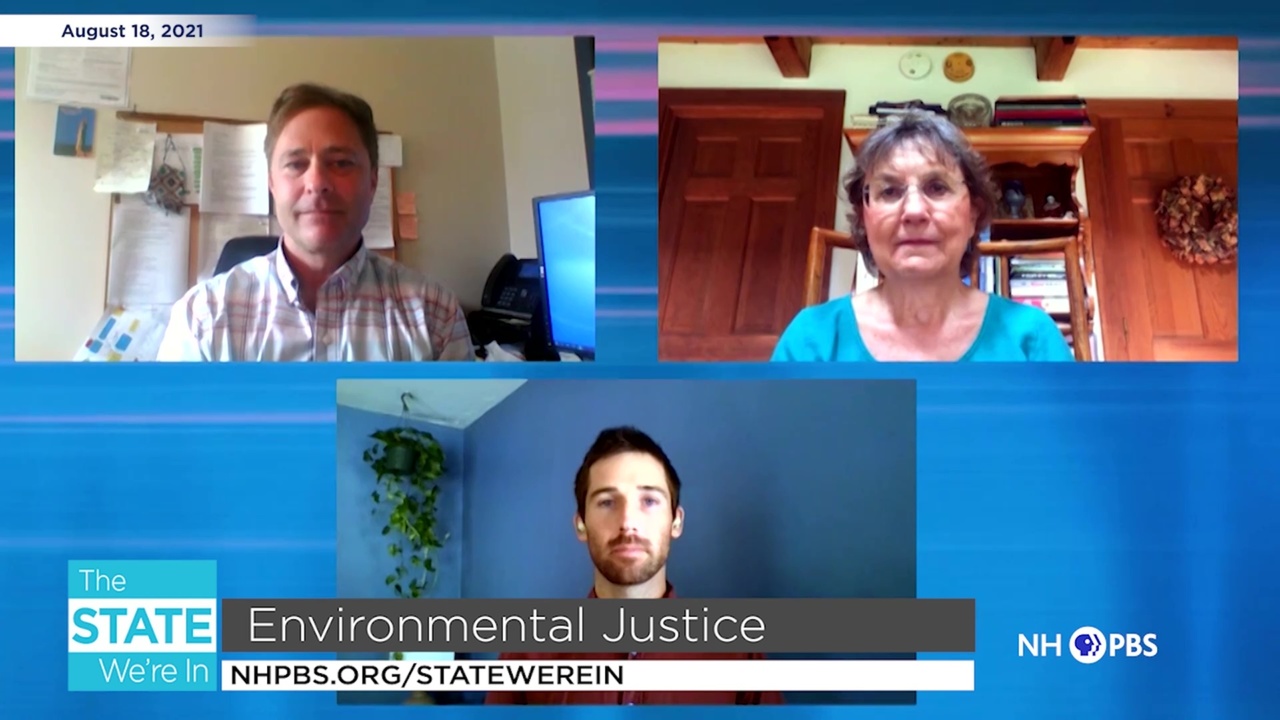 The State We’re In Program Transcription

This content has been edited for length and clarity. Watch the full episode of The State We’re In.

The biological effects of heat on the human body are universal and indisputable. Hyperthermia – too much heat over a certain amount of time – can lead to heat exhaustion, heat stroke, and even death. Like other social problems today –such as the lack of affordable housing or access to healthy foods – not everyone suffers equally when it comes to the effects of heat. Those with diabetes, heart disease, other comorbidities, the elderly, people of color, and the poor, suffer at higher rates. In New Hampshire, a state with thousands of acres of forests, many people – especially in urban areas – continue to lack access to something as simple as the health benefit of shade.

In an age of racial-justice reckoning and political attention on social inequities, environmental justice advocates are hoping to strengthen laws and build community support. But in New Hampshire, environmental justice statutes that protect vulnerable groups of people burdened by the effects of development, or those lacking environmental benefits such as greenspace or clean air, do not exist. People living in areas lacking greenspace are more susceptible to the heat-island effect, and these areas are also places where the median income is lower and social vulnerability is higher.

Melanie Plenda: Scott, can you provide some context about what environmental justice is and what the project entails?

Scott Merrill: Environmental justice as a concept can be broken down into two distinct uses. You have environmental justice as a social movement that looks at the typically disproportionate burdens and benefits that vulnerable populations experience because of development. Then you also have the legal aspects, eras, social science, the academic stuff that comes along with it. It also includes activism. What we were looking at for the first part of this series was the issue of heat and how heat affects certain vulnerable populations around the state of New Hampshire in a disproportionate way.

Melanie Plenda: Kathy, to you, why is awareness about this issue so important? What did you learn about that through your reporting?

Kathie Ragsdale: When Scott first contacted me about participating in this, I was confused by the subject of environmental justice. What does that mean? How can the environment be unjust? Doesn't the sun shine on all of us equally? The answer is no, depending on where you live, how old you are, how much income you have, any number of variables; you're affected by temperatures in very different, sometimes adverse ways - particularly with the elderly. I wouldn't think that would be a population that had a particular vulnerability but it does, as do so many of these other groups that we're talking to.

When I was interviewing Ellen Flaherty, who's the director of the Dartmouth Center for Health and Aging, it happened to be during one of those periods when we were having really intense heat for several days in a row. I had noticed that when I would stand up, I got a little dizzy or sometimes a little headachy, and Ellen had started cataloging some of the symptoms of dehydration that elderly people in particular experience. She was addressing the question of the elderly and I realized I was having the very symptoms she was describing. I'm part of the older population, I live in an air conditioned home in the woods, I don't have any major medical conditions. Ellen pointed out that when you're at risk, the smallest little change in your environment can push you over the edge into dehydration and potentially hospitalization or worse.

Melanie Plenda: How does environmental justice kind of shape up in New Hampshire? Are there other remedies for this, is the Granite State doing enough?

Scott Merrill: So, yes and no. There are environmental justice policies, but according to Tom Irwin with the Conservation Law Foundation, there are no environmental justice laws. Organizations like his are wishing to create an environmental justice statute. In terms of advocacy work, the CLF is doing quite a bit. Specifically in Manchester, they're currently working on a community gardens and green spaces campaign. They're looking at neighborhood highways, which are these roadways that go through various neighborhoods in Manchester. I went for a bike ride with Arnold Mikolo and another person whose name escapes me at the moment, and they were out looking at these various neighborhood highways and trying to map out the city to determine where the health risks were from these neighborhood highways and where bike lanes were needed and things like that.

The problem is that in Manchester, as in other cities, you could be standing on one block and you'll be looking at a census tract on one side of the street where the median income might be $100,000, and then you look across the street and the median income might be $20,000. You can see the difference in the way that traffic moves through those two neighborhoods: in the neighborhood with the higher median income, you have a 20 mile an hour speed limit, you have slower traffic, you have more trees; then you turn around and you look on the other side of the street and there's cars ripping through the neighborhood, there's more air pollution, there's more danger for children, etc. Folks like that are doing a lot of good work in terms of advocacy, but as far as statutes, there just isn't one right now.

Melanie Plenda: What is it that environmental justice advocates want people to know?

Kathie Ragsdale: A lot of New Hampshire housing stock is very old and was built at a time when air conditioning wasn't thought necessary. With climate change, those buildings have become more and more like heat containers, especially when we have heat waves like we saw this year. We need to address some infrastructure issues. Looking at the big picture, a lot of people we spoke with talked about the need to decarbonize - that's a taller order. Even things like making sure vulnerable people in your community are looked after during times of heat stress, checking on them, making sure they have water and access to whatever they need, and also educating people for some self-help on the importance of things like hydrating, etc. Looking at big picture stuff like de-carbonization all the way down to being kind to your neighbor are all things we need to consider.

Melanie Plenda: What were some of the things that really stood out most to you?

John Bassett: The thing that was the most striking for me was how big a difference there was in the temperature between the rural areas and the urban areas. We've all experienced the heat island - when you walk downtown or when you get out of your air conditioned car and you're walking across a hot parking lot, you're experiencing an area of much, much higher heat than if you're walking on a dirt road in a shady area. If you map the temperatures out across the whole city, especially bigger cities with a lot of urban sprawl, you can see little pockets where there is a lot of heat. None of our cities are big enough that you can see large pockets like that except for maybe Manchester.

I remember when I was putting together some of the maps for this project, you could see that there was a bit of a heat island in downtown Manchester right by city hall, along Elm street. Then there was a flaming red spot to the Southeast in the city, and I thought I had messed up the analysis somehow. I was double checking it and I went to Google maps and looked at what it was, and it's the parking lot and the roof of the mall. That was by far the hottest spot in Manchester; it was hotter by more than 30 degrees compared to the average for the city.

These articles are being shared by partners in The Granite State News Collaborative. For more information visit collaborativenh.org.