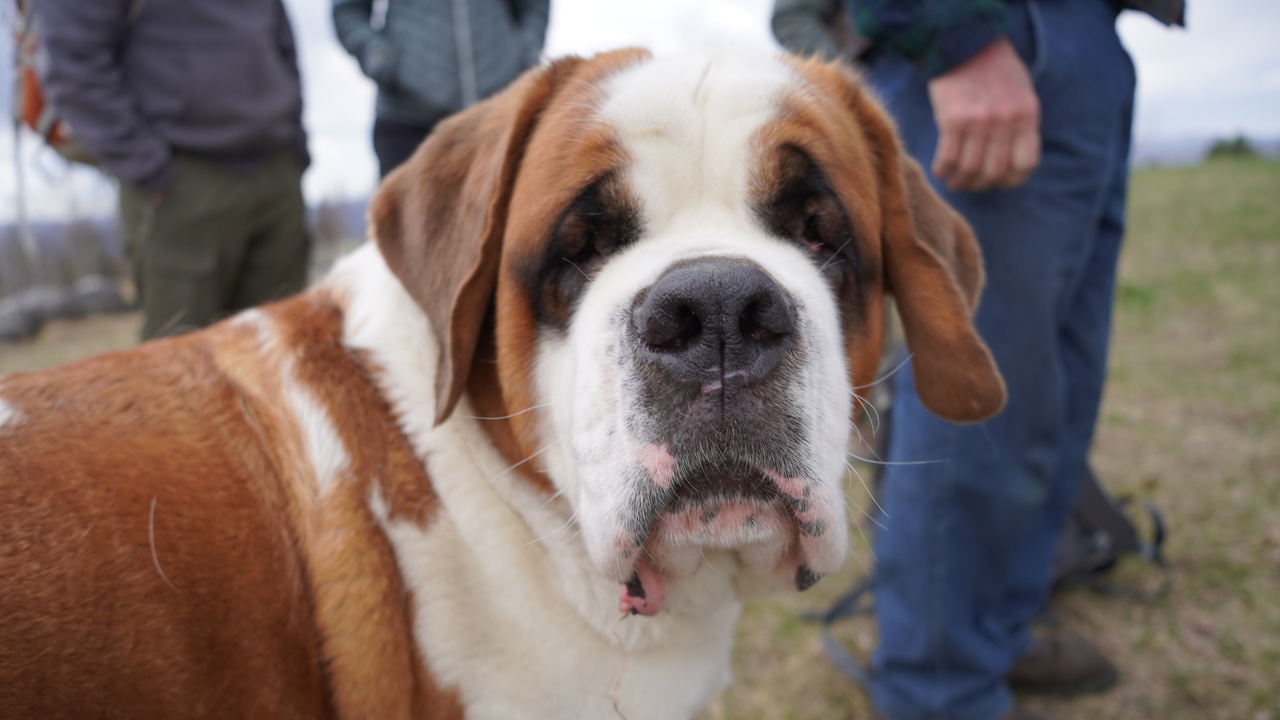 On a nearly perfect mid-April morning, a group of us gathered at a freshly created parking lot near the western foot of two small mountains near West Newbury, Vermont. Tucker Mountain, dominated by its less spectacular, but taller (by 52 feet) neighbor, Woodchuck Mountain, was our goal for the day. Besides the two-man film crew armed with three cameras and a drone, there was a couple from Greenfield, Mass., the high bidders on New Hampshire Public Broadcasting's auction for "a day with the crew; there was Gary Moore, a good friend from Bradford, with his 175-pound Saint Bernard puppy, Oak; and I was there with Kiki, my 25-pound terrier, who took every chance she got to stand between my feet gazing anxiously at Oak, who, after a perfunctory sniff, carelessly ignored her.

Three other folks, known collectively as the stewards of Tucker Mountain, were hiking in from the east and would meet us at a junction near the summit. So we filmed the "open" of the episode and were off up the ancient rocky road. Slabs of scarred bedrock occasionally served as the pavement. It wasn't hard to tell the continental ice sheets had dealt grumpily with tough gray mounds of schist that had stood in their way so many millennia ago.

You can go back as far as you want to with Tucker Mountain. About 400 million years ago it was part of a continental shelf beneath the ocean east of the Adirondacks. When the Proto-Eurasian tectonic plate came calling some 375 million years ago, the sediments of the shelf were crumpled and driven upward into what are now the mountains of Vermont, reduced to stumps of their former selves by subsequent erosion and recent glaciation.

The Abenaki lived here along the Connecticut River before the arrival of the colonists, who swallowed up the fertile land that had been the bottom of a long-lasting post-glacial lake whose level you can still see in the riverbanks upstream of Hanover. The present up-and-over Tucker Mountain Road most likely follows Indian trails into the Waits River Valley. (The Waits River was named for Captain Joseph Waits of Rogers' Rangers, who retreated with his company down that busy stream after their raid on St. Francis, and as legend has it, shot a deer, saving his men from starvation, and left the uneaten meat hanging in a tree, where a following party found it.)

Once the bottomland was taken, later settlers migrated up the hillsides – the origin of the Vermont hill farm. It was invariably rocky and difficult; the miles of stone walls half-hidden by undergrowth attest to that. The lives of the Tucker Mountain pioneers, their sheep and milk cows, and their battles with potato-loving deer, are nostalgically described by Tom Kidder, the retired director of Dartmouth's audio-visual department, in an online (and illustrated, naturally) essay, "A History of Tucker Mountain."

After decades of changes in ownership that resulted eventually in part-time residence by non-resident owners, vandalism and the threat of it – one beautifully restored house was gutted of its antiques and set ablaze in an attempt to conceal the theft ¬– convinced some owners to look for buyers who would protect the land from further "civilization." After much negotiation, it was conveyed finally to the Town of Newbury as the 600-acre Tucker Mountain Town Forest.

We met the other three hikers and stewards of the mountain, Tom Kidder and John and Caroline Nininger of the Wooden House Company, and climbed to the cleared, grassy summit. To the east, the view stretched beyond Mount Moosilauke and Franconia Ridge to Mount Washington; to the south, Mount Ascutney; to the west, the Green Mountains; and to the north, the little hump of heavily wooded Woodchuck Mountain. The summit was cleared laboriously of decades of brush by willing volunteers, and is mowed annually, keeping the magnificent view open.

Watched carefully by my tiny canine accompanist, I munched a bologna sandwich in the delightful company of friends of long standing, and reflected on the effects of the devotion of many good people who care for beautiful, delicate places like this modest mountaintop. The challenge of their calling is never-ending. We can only hope that succeeding generations will rise to it.