Discovering Smith Pond with the Windows to the Wild crew 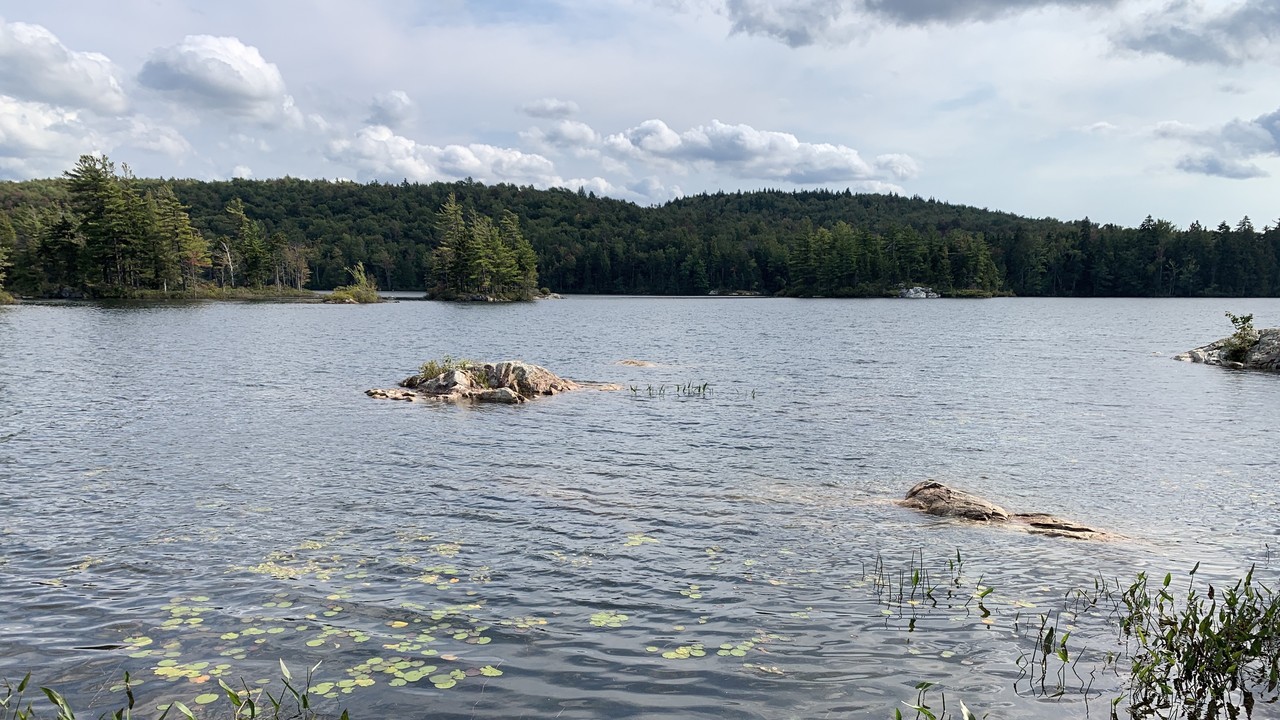 Traveling around this part of New England, you're often flanked on both sides by thick, inscrutable woods. If you didn't know better, you might think it was the forest primeval. But after almost four hundred years of invasive European habitation, it could hardly be that. Hidden by the dense second growth are old farms, stone walls, logging roads, breached dams, abandoned villages, and even tumbledown mills and camps.

If you drive east from Lebanon on US Route 4, you're shortly presented with an option – NH Route 4A – that's headed in the same direction and, in fact, rejoins Route 4 about forty miles farther on. Both are about the same length. I generally take 4A because it's bushier and quieter.

The first bit is hardly bushier; it passes through the camps squeezed between Mascoma Lake and Shaker Mountain. Then a break, followed by the La Salette shrine and the impressive stone buildings and magnificent restored barn of the former Shaker community. Then bushes.

But about a mile east of the Shaker Museum, there's a white sign (parallel to the road; I missed the turn initially) that indicates parking for the Smith Pond Shaker Forest. It's obviously pretty new: fresh, well-graded crushed stone, with a kiosk and a gated trail leading away southward. After a brief diversion – I locked my car key, dog, and cellphone inside my car (a nearby garage rescued us) – we were ready.

I'd been here before – kind of. During a tour of the Shaker settlement some years ago, we took a look at the pond that had fed their big mill. It was empty; but the guide mentioned that the Shakers had dug a canal and built dams to bring water from higher ponds during dry seasons. I've been wanting ever since to see them. Another time, seduced by a Fish and Game Department description of a pristine fly-fishing-only pond south of the area, I drove in from I-89 on the west side and bushwhacked through the woods to reach it, only to find it surrounded by ATV tracks, beer cans, and empty worm boxes. I won't do that again. Couldn't, even if I wanted to.

The three-man film crew from Hew Hampshire Public Broadcasting was ready to go. Jason Berard, the Stewardship Director of the Upper Valley Land Trust, was our guide, along with Alan Strickland, a very pleasant, laid-back guy who's been wandering this property for more than thirty years. They led us along the canal, dug by the Shakers beginning about 180 years ago with only hand tools, horses, oxen, and pure grit.

The trail came up against a massive earth-filled stone dam. The dam had blown out a few years back during a major storm, but the tunnel-like spillway was intact. A smaller dam nearby boasted a spillway of rot-resistant chestnut, which once dominated these woods. There are still a few young chestnuts here doing their futile best to grow up. Jason was keen to show us the so-called Da Vinci bridge that a Land Trust team of volunteers had built across a stream. That was a new one on me. The design is brilliant, naturally; you can Google it.

We hiked back to the cars and drove around to the western entrance of the 1000-acre tract. It's always best to travel with someone with a key. Jason let us through a locked gate, and we were able to drive right to Smith Pond. Here we met Greg Baker, who owns the only inholding on the pond and who, along with a friend, was responsible (it's hard to believe the red tape!) for replacing its failing dam with a spectacular new concrete one. "Nobody wants to own a dam," he confided. The liability is too great. It wasn't till he built the new dam and sold it to the Land Trust – for one dollar – that the Trust was able to take possession of the land and watershed.

All the components have come together here: generous funding, an organization devoted to preservation of wild and historic places, volunteers, and a willingness to share the land with the public – but with restrictions enacted to preserve it. Recalling my long-ago anger at the despoliation of that nearby "pristine pond," I enjoyed reflecting that, with our worst impulses held in check by our best, we'll likely be able to continue to enjoy beautiful places like this.