A final walk and a pledge to carry on 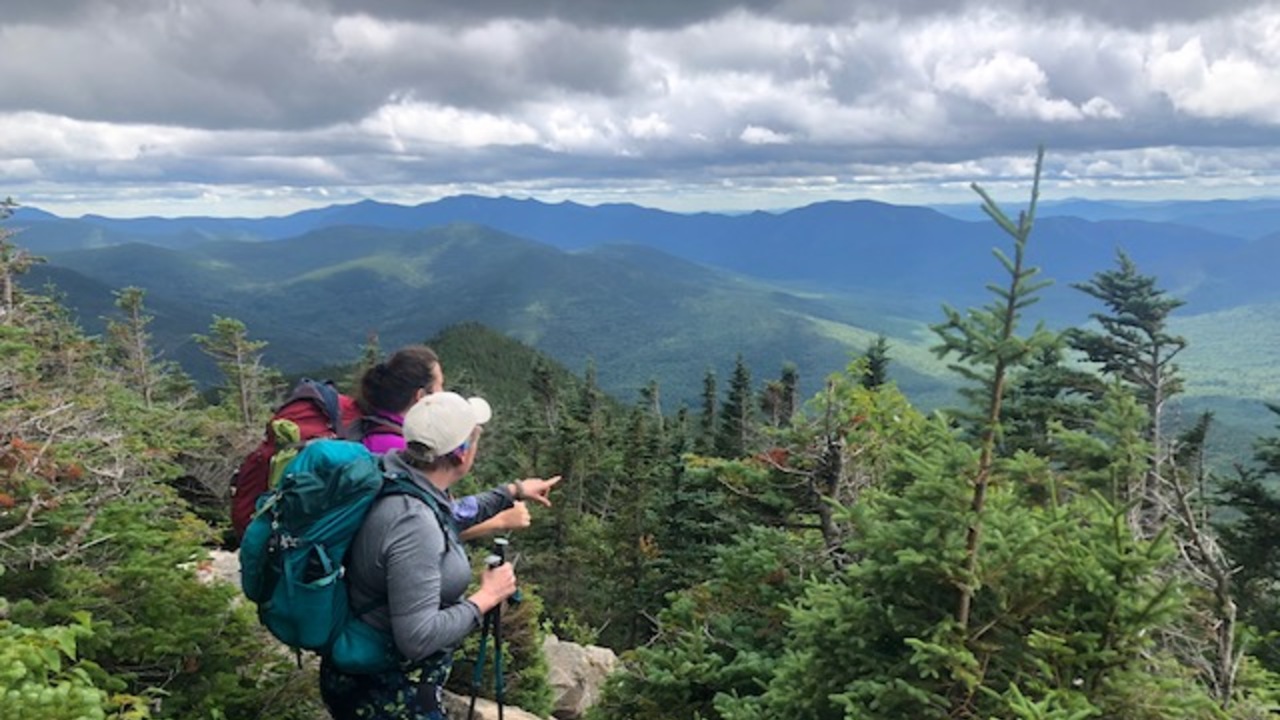 It was a perfect day to complete a quest or a pilgrimage: blue sky at seven in the morning; cool, but promising heat later; a weekday respite from crowds of hikers. But it started in the most unprepossessing of places: the parking lot at the foot of the Nineteen-Mile Brook Trail on New Hampshire Route 16 between Gorham and Jackson. As we gathered for the start of the day’s hike, traffic booming down the long grade from Pinkham Notch to Gorham roared past – out-of-state cars, semi-trailers, motorcycles – frustrating our videographer. We had to record a conversation with Rachael before she set out up the mountain.

So, to get away from the racket, we hiked a few hundred yards up the trail, which had been churned to a black muck by thousands of tramping feet – the pandemic-era recreation boom has not been kind to the mountains – and finally paused to talk for a bit. Kiki’s nose and feet had been busy all this time; she was soaked in sable slop right to the waterline.

In 2009, Rachael had met Chris, the love of her life, online, and together they had set out to climb the 48 4000-foot-high mountains of the White Mountains. Along the way, after a few years together, they got married. They camped and hiked on their summer vacations, and hiked in the winter, as well. “We were never happier,” she wrote recently, “than when we were hiking.”

Their 46th of the 48 highest was to be Owls Head, which barely breaks the 4000-foot contour, but is likely the remotest peak, requiring a round-trip hike of a bit over eighteen miles, mostly over easy grades of old logging railroads and tote roads, but crossing a few unbridged brooks and ending in a steep hike up a bouldery slide to a wooded summit without a view. Still, if your goal is the full 48, it has to be done; so on an August day a year ago, Rachael and Chris set out. It was a day like any other, if a little longer in prospect, and nothing seemed amiss. But just before the summit, Chris complained of being tired. They stopped, drank some Gatorade and had a snack, and went on. One-tenth of a mile from the summit, Chris suddenly collapsed and became unresponsive.

They had a cellphone with them; Rachael was able to contact 911. They in turn notified the local search-and-rescue crew, who began immediately to pack up for the trek into Owls Head, while the dispatcher at 911 talked Rachael through the procedure for CPR. Then, noting the considerable amount of time it would take for the rescuers to reach Rachael and Chris, the National Guard sent a helicopter, which picked up both of them and flew them to Dartmouth-Hitchcock, where Chris was pronounced dead.

Stunned and distraught by the suddenness and finality of the event – Chris was only 62 and an ex-Marine, apparently in perfect condition – Rachael stopped hiking for a while. Then she decided to finish the 48 peaks in Chris’ memory, with a tiny stuffed fabric “MiniChris” pinned to her hat or shirt. Which brought her at length, with a few friends and a New Hampshire Public Television videographer, to the foot of Wildcat Mountain, the last of her challenges. They’d hike down the other side.

That traverse, as much as I would have loved to go with her, is now beyond my abilities – about nine miles and a good bit of climbing – so I bade her and her friends bonne journée and squished back to the car, accompanied by a very muddy little dog. I was to drive around the mountain with Phil, the producer (himself recovering from a scary heart attack), to meet the party as they descended the Wildcat Ski Area slopes on the back side. The lift, which normally operates during the summer, is down this year because of the threat of the pandemic. No choice; Rachael and her friends would have to hoof it all the way down.

We had a lot of time to kill; but as my sainted grandfather used to say, “The only way to kill time is to work it to death.” So we packed a big video camera and tripod into my new hybrid and headed for the Mount Washington auto road. From the top, we’d have a panoramic view of Wildcat Mountain’s serrated ridge and four summits. I was curious to see how the hybrid would handle the auto road – up and down.

If you’ve ever driven that road, you know how interesting it is. Basically a relic of the horse-and-buggy days constantly upgraded since its opening in 1861, it advertises “adventure at every turn” and advises that, because of the dangerous dropoffs, it’s “not for newbies”. Some drivers freeze at the most adventurous spots; but after several trips up and down, I find I hardly notice it. So up we went. A beautiful, balmy day on the mountain that also advertises “the world’s worst weather.” Phil got his panoramic shots, I shuffled around the summit cone, and Kiki got to sniff into dozens of holes amid the boulders. If she had any inkling of the significance of her location, she betrayed utterly no hint.

After a leisurely lunch alfresco in Jackson, we parked near the foot of the Wildcat trails to await the arrival of our hiking party. One of them, a search-and-rescue team member who’d been gearing up on the day of Chris’ death and later befriended Rachael, was wearing a tracking device, so we could tell where they were and where they’d be coming from. And finally, there they were – Rachael looking a little tired, and walking slowly, almost as if she didn’t want the months of striving for this goal to end.

Nobody hugged – social distancing; it was namastes and elbow bumps all around. The afternoon sun drove us into the shade for our good-byes. “What’s next for you?” I asked a teary, but smiling Rachael. “Well,” she said, “I’ve been reading New Hampshire’s Fifty-Two with a View – A Hiker’s Guide, and I’m going to keep right on going.” She clutched her little MiniChris, patted her old setter, Lucy, who’d been brought to meet her, and turned, ready to engage whatever life and the mountains still had in store for her.