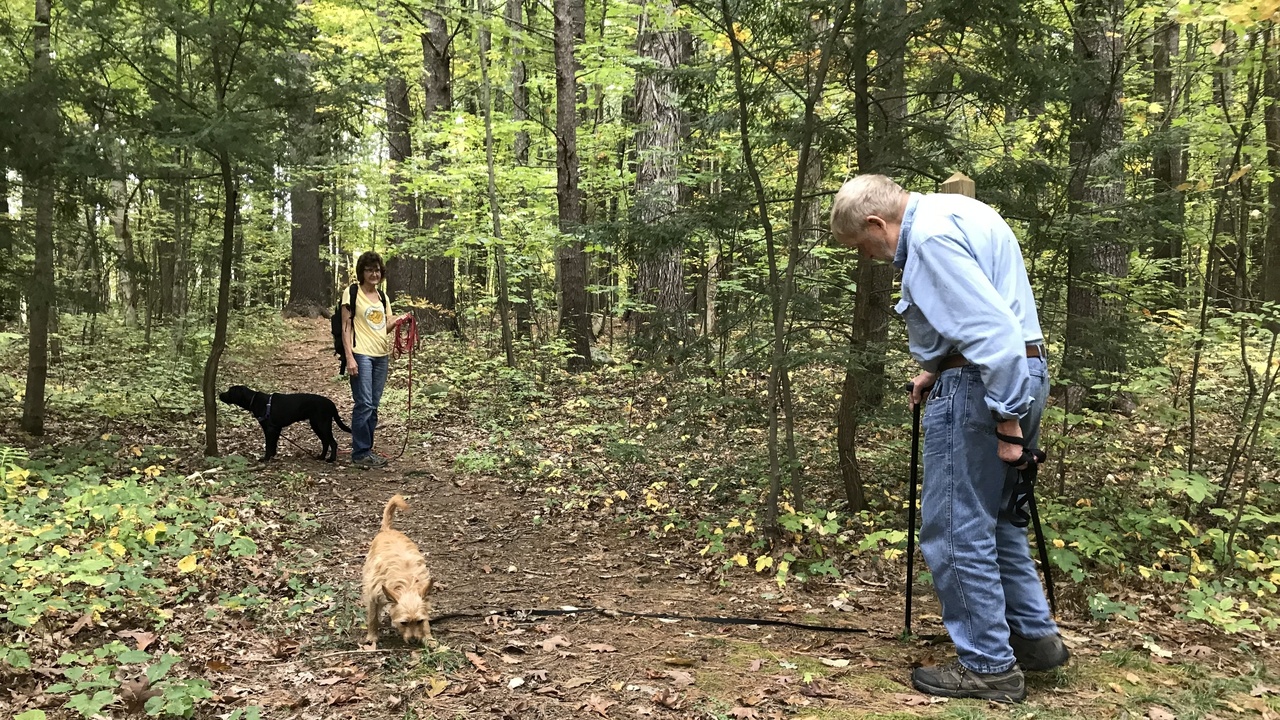 (Durham, NH, 3/23/20) Like many dog owners, Windows to the Wild host Willem Lange takes his dog, Kiki, for a walk every day. They prefer to explore the woods. “She goes where she will and I go where I plan and we go together,” says Lange. During a recent visit to Farandnear Conservancy in Shirley, MA, Forest Bathing Guide Nadine Mazzola taught Lange a new way to experience those walks – by letting Kiki be the guide.

Mazzola first introduced Lange to the concept of Forest Bathing while filming an episode of Windows to the Wild in 2016. Forest Bathing refers to a meditative enjoyment of the woods rather than actual bathing. The practice originated in Japan as a form of therapy, encouraging participants to slow down, relax and observe the natural world. Mazzola became interested in forest bathing after a bout with breast cancer. “I was recovering from treatment,” she says, “and I was really focused on self-care.”

As she became more aware of her own relationship to nature, she began to view her dog, Juliet’s, interactions with their environment in a new light. On one walk, Juliet unexpectedly jumped into some ferns to chase a chipmunk. It looked like so much fun that Mazzola joined her. “That was the first time I had the realization that she, in her own way, had given me an invitation.”

According to Mazzola, the trick to forest bathing with your dog is to adapt yourself to your dog’s experience, rather than how you think the walk should go. “One of the amazing things about forest bathing with our dogs is that we actually tune into our dogs,” she explains. “Dogs and humans have more of a connection than even human to human in terms of an ability to pick up on each other’s signals.”

For Windows to the Wild producer Phil Vaughn, the experience was eye-opening. “A dog is likely to take you places you might pass by,” he says. Like Lange, Vaughn walks his dogs daily. “It’s a different experience for us now. I’m more patient as they explore nearly every bush they encounter.”

You can learn more about how to forest bathing and how to enjoy it with your dog on the next episode of Windows to the Wild, premiering Wednesday, April 1 at 7:30 pm on NHPBS or online at nhpbs.org anytime.