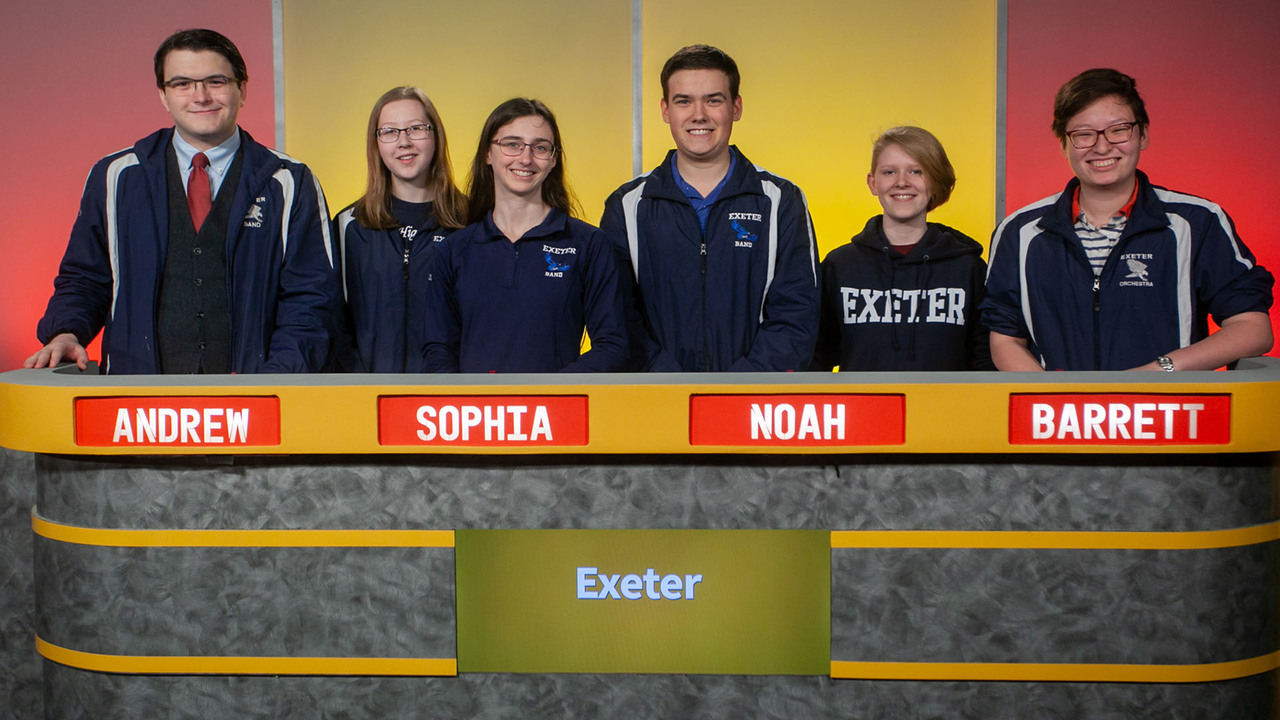 (DURHAM, March 21, 2020) - The Cardinals of Bishop Guertin High and the Blue Hawks of Exeter High met in the first round of Granite State Challenge.

The Bishop Guertin Cardinals were represented by Captain Jack Groeneveld-Meijer, Isabella Wang, Amelia Ballingall, and Daniel Enright along with alternates Bree Cooley and Geoffrey Zhang. The team was coached by Kathryn Gann. Bishop Guertin High is located in Nashua and has an enrollment of around 807 students.

After answering questions about Jimi Hendrix and Abbott and Costello, and most impressively spelling Winnipesaukee correctly, the teams ended the first round with Bishop Guertin in the lead by a slim ten points with score of 80-70.

The teams kept the score close in a competitive played a second round and at the end of the round Bishop Guertin held on to their ten point lead, ending the round with a score of 200 to 190.

The alternates joined their teams for the 60-second round and after some debate, Exeter chose the category "Old Age" in which all the answers would include the word "old." They answered nine out of ten clues correctly, missing only on Old Dominion University. Bishop Guertin chose the category "Huff and Puff" and had to answer questions where the answer included either "huff" or "puff" or both. They answered seven out of ten clues correctly, missing on Puff the Magic Dragon, puffins, and cream puff. At the end of the round, Exeter led by a score of 290-270.

In the fourth and final round, correct answers are worth 20 points, but an incorrect answer costs a team 20 points. The teams both played a great final round. At the end, Exeter emerged the winner by a score of 380-370.

Exeter now goes on to face either Bow High School or Fall Mountain Regional High in the quarterfinals.