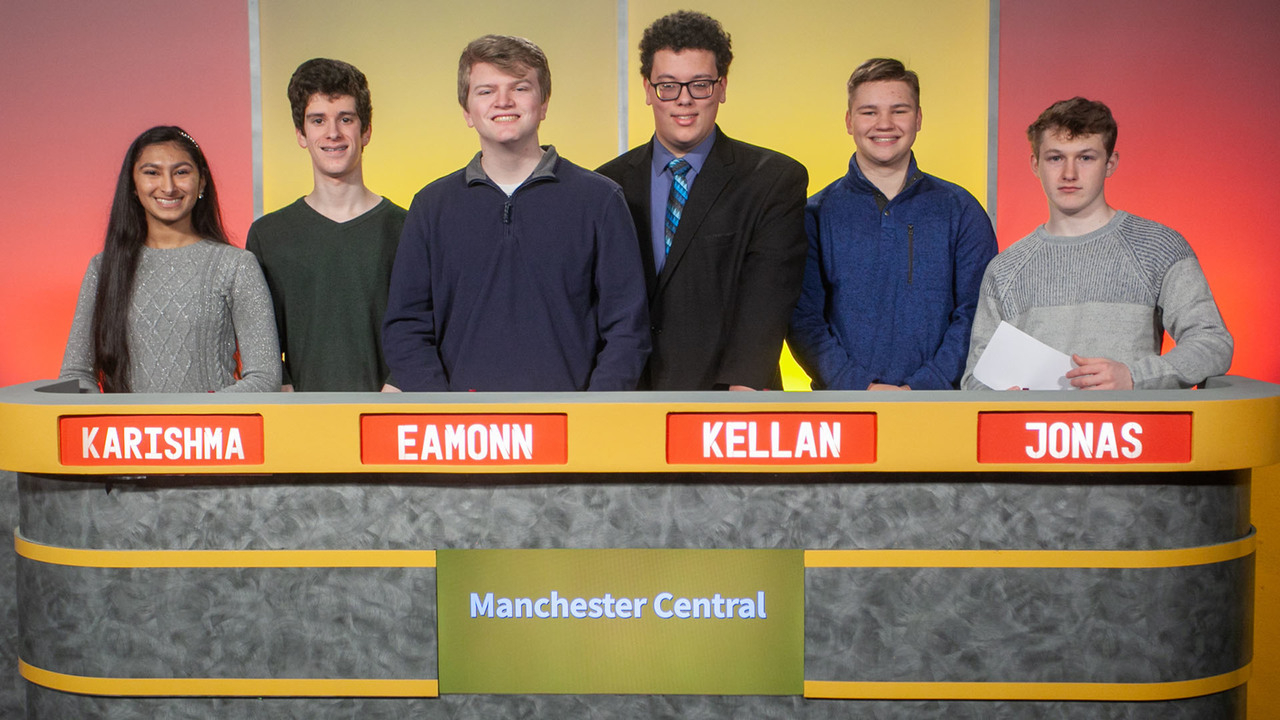 (DURHAM, March 15, 2020) - Do you know the Salisbury, NH native who served as U.S. Secretary of State under Presidents William Henry Harrison, John Tyler and Millard Fillmore? That question stumped both Hanover High and Manchester High in Round One of Granite State Challenge.
The Hanover Marauders were represented by Captain Daniel Bender, Dennis Acker, Tom Mosdal, Luke Szczepiorkowski and alternate Cameron Bonner. The team was coached by William Murphy. Hanover High is located in Grafton County and has an enrollment of around 749 students.
Playing for the Manchester Central Little Green was Captain Karishma Manchanda, Eamonn Ryan, Kellan Barbee, Jonas Weissberg, and alternates Aiden O'Connell and Cooper Hamel. The team was coached by Lorraine Meyette. Manchester High enrolls around 2,100 students.
Manchester Central came out strong and at the end of the first round led by a score of 110-40. In the second round, Hanover seemed a bit more confident but at the end of the round trailed Manchester by a score of 290-220.
In the 60 Second Round the alternates joined their teammates, Hanover chose the category "It Takes Two" where they had to name famous pairs. The missed questions about Batman and Robin, Lucy and Ethel, and Jay and Silent Bob.
Manchester Central chose the category "B and B" where the answers were two words that each began with the letter "B." They missed a question about Betty Boop and the Big Bopper. At the end of the round Manchester led by a score of 370-290.
In the final round correct answers are worth 20 points, but an incorrect answer will cost a team 20 points. Leads can quickly change in the round and with a minute left in the game, Hanover had closed in on Manchester Central and trailed by only 40 points. Unfortunately, the team missed the answers to a couple of questions and at the end of the round Manchester Central walked away with a win by the final score of 490-410,

Manchester Central now goes on to face the defending champs, Plymouth Regional High, in the quarterfinals.

Still thinking about that New Hampshire native wwho served as U.S. Secretary of State under three presidents? It was Daniel Webster.