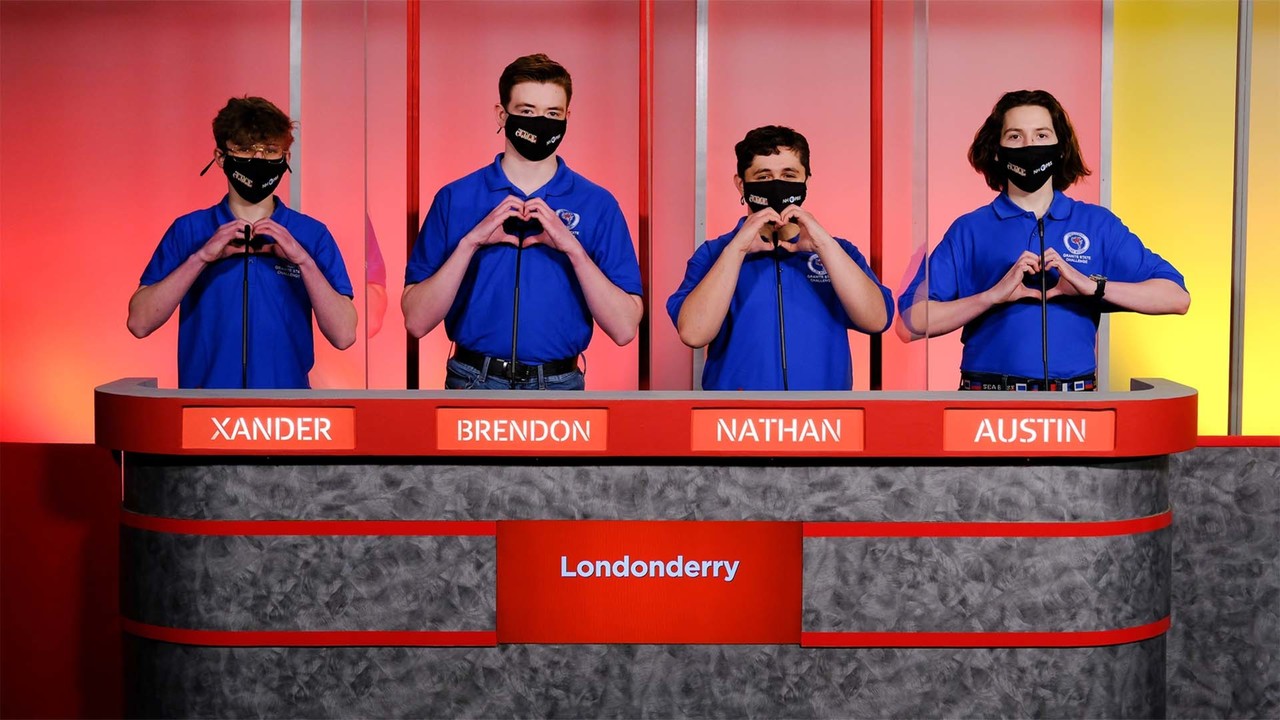 Playing for Londonderry was captain and senior Austin Kilgore along with sophomores Nathan Ferrick, Brendon Saranich, and Xander Cogan. The team was coached by Peter Willis. Londonderry High enrolls 1,521 students.

In the first round of the game, correct answers are worth 10 points, and there is no loss of points for incorrect answers. Londonderry's Xander Cogan put the first 10 points on the board by naming Mount Olympus as both a real mountain in Greece and the mythological home to the Greek gods. Manchester Central captain Kellan Barbee picked up the first 10 points for his team by knowing that crimson was the school color of Harvard and the University of Alabama. Londonderry's captain, Austin Kilgore then answered the next five questions correctly and took his team to a 60-10 lead. Akshay Manchanda of Manchester Central picked up 10 points with a question about the 1984 movie starring Prince, Purple Rain. Nathan Ferrick of Londonderry knew that Dwight Eisenhower was a halfback on the 1912 West Pont football team, and Londonderry ended the round with a strong 180-90 lead.

In the second round of the game, correct answers are worth 20 points and there is no loss of points for incorrect answers. The second round also includes the 40 for 40 Question from a past season of Granite State Challenge, which celebrates the 40th season of the game, and the Unitil Power Question worth double points. Austin Kilgore of Londonderry opened the round by knowing that the Isles of Scilly are found off the coast of Cornwall. The next question - This HBO drama series set in Baltimore explored urban life and the interactions between law enforcement and various institutions - was the Unitil Power Question. Kellan Barbee picked up 40 points for Manchester Central with the correct answer, The Wire, and the score was now 200-130. Kellan also picked up 40 points for his team later in the round with the 40 for 40 Question from Season 38 naming Space Jam as the 1996 movie starring basketball legend Michael Jordan and Bugs Bunny and the score was 260-210. They could not narrow the lead though, and at the end of the round, Londonderry had a 420-230 lead,

The third round of the game is the Three Strikes and You're Out Round. Each team picks a 10-question category and each team member, starting with the captain, gets one question. The team continues to answer questions until they miss three questions. Each team also has three passes in each round. If a team answers all 10 questions correctly, they pick up an additional 10 points. Manchester Central chose the category All You Need is Love in which all of the answers included the word love. The team answered four of the ten questions correctly, picking up 40 points. Londonderry picked the category, They Call It Mellow Yellow. All of the answers in the category included the word yellow or a form of the word yellow. The team answered seven out of the ten questions correctly and at the end of the round, Londonderry had a lead of 490-270.

In the final round, correct answers are worth 20 points, but an incorrect answer will cost a team 20 points and leads can be quickly lost or gained. Nathan Ferrick of Londonderry opened the round by knowing that 300 is a perfect score in ten-pin bowling. Neither team could identify poet Donald Hall, and both teams lost twenty points on a question about the smallest true monkey in the world, the pygmy marmoset. Neither team could answer a question about what the acronym WYSIWYG stands for in computing, but Akshay Manchanda of Manchester Central picked up 20 points for his team by knowing that the fertile lowlands known as the pampas are found in South America, and his teammate Dante Parsons correctly named Tom Hanks as the actor who played Woody, David S. Pumpkin, and Forest Gump, bringing the score to Londonderry 490 and Manchester Central 290. Manchester Central played an aggressive round but in the end, fell to Londonderry by a score of 550-390.

Londonderry now moves on to face Portsmouth High in the semifinal round.