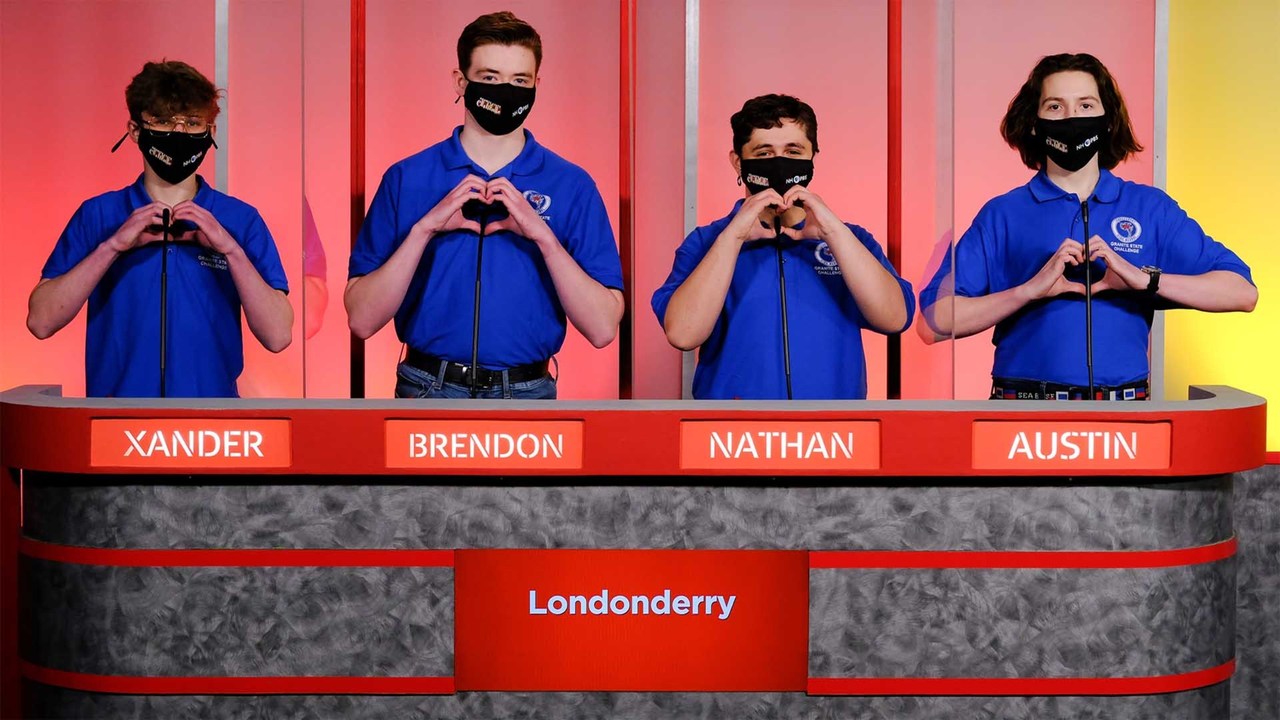 In the first round of the game, correct answers are worth 10 points and there is no loss of points for incorrect answers. Nathan Ferrick opened the game and put the first ten points on the board for Londonderry by knowing that the Baltimore Ravens took its team name from a poem by Edgar Allan Poe. Nathan added another 10 points to Londonderry's score by naming Maine as the only state with a one-syllable name. Adam Cico put the first points on the board for Winnicunnet by naming Reykjavík as the capital of Iceland and the northernmost capital city of a sovereign state. Trey Gourgeot picked up 10 points for Winnicunnet by knowing that the furcula is better known as the wishbone in a turkey. Londonderry captain picked up 10 points by naming the movie "Jaws" as the story of a town in Amity, Massachusetts threatened by a fish. Austin proved his toothy-fish knowledge by naming "Barracuda" as a song from the band Heart. Later in the round,  Xander Cogan of Londonderry correctly identified Concord teacher Christa McAuliffe as the first civilian selected to go into space and Anna Murray of Winnicunnet correctly identified the loon as a bird known for four calls - the wail, tremolo, yodel, and hoot. At the end of the round, Londonderry had a lead of 150-50.

In the second round of the game, correct answers are worth 20 points and there is no loss of points for incorrect answers. The second round also usually has two questions worth 40 points -  the 40 for 40 Question from a past season of Granite State Challenge, which celebrates the 40th season of the game, and the Unitil Power question.  Adam Cico put the first points on the board for Winnicunnet by knowing that the puck drop at the opening of a hockey game is called a face-off. On a roll, he also picked up 20 points on the second question of the round by naming singer-songwriter Phoebe Bridgers as the artist who released the album "Stranger in the Alps" in 2017, and the orca as the species of whale featured in the movie "Free Willie,"  tightening the score to 150-110. Neither team was able to answer the Unitil Power Question about the 1983 song "Electric Avenue" by Eddie Grant.  Adam Cico of Winnicunnet picked up 40 points for his team by answering a question about the narwal from season 34 of Granite State Challenge. The round ended with Londonderry holding a lead of 350-150.

The third round of the game is the Three Strikes and You're Out Round. Each team picks a 10-question category and each team member, starting with the captain, gets one question. The team continues to answer questions until they miss three questions. Each team also has three passes in each round.  If a team answers all 10 questions correctly, they pick up an additional 10 points. Winnicunnet selected the category Common COld in which all of the answers included the word cold. The team got eight out of ten correct, missing only on questions about cold fusion and the Truman Capote novel, In Cold Blood, adding 80 points to their score.  Londonderry selected the category Mind Your P’s and Q’s – all of the answers included both a P and a Q.  Missing on questions about the words applique, quadriceps, and pipsqueak, the team picked up 70 points in the round, and Londonderry held on to a lead of 420-230.

In the final round, correct answers are worth 20 points, but an incorrect answer will cost a team 20 points and leads can be quickly lost or gained.  Winnicunnet's Trey Gourgeot picked up the first 20 points of the round with a question about the feature that ungulate species share. Anna Murray put another 20 points on the board for Winnicunnet by knowing that "Good Grief!" is Charlie Brown's catchphrase. Trey Gourgeot picked up another 20 points for Winnicunnet by correctly spelling orangutan,  Anna Murray added another 20 points to Winnicunnet's score by identifying hydrogen as the first element on the periodic table, and Marissa Lambert picked up another 40 points correctly answering questions about Albus Dumbledore and King Kong. Adam Cico of Winnicunnet then added another 20 points to the score correctly identifying the saxophone as the instrument played by Charlie Parker, John Coltrane, Lisa Simpson, and Former President Bill Clinton, tightening the score to 460-390, but with just a little over a minute left in the game, Winnicunnet was not able to narrow the gap, and Londonderry won the match with a score of 500-410.

Londonderry High will now face Manchester Central in the quarterfinal round.